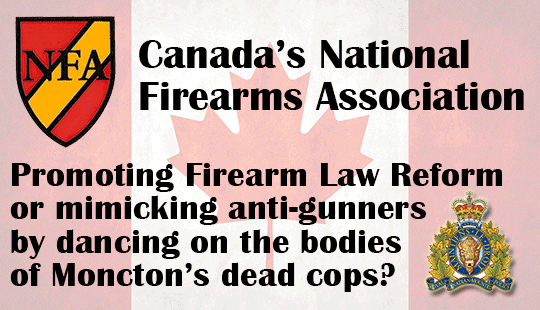 As most already know, this past Wednesday evening saw 3 RCMP members shot dead, with more wounded.

The entire city of Moncton, put on lockdown until police finally captured their intended target late Thursday, finally resumed more normal operation. Government buildings and schools closed for the manhunt reopened. Residents, prevented from returning to their homes due to police barricades finally made it back to worried loved ones.

The alleged killer, identified as Justin Bourque, is according to the media a “gun nut” which all but guarantees a fresh wave of attacks on Canada’s law-abiding firearm owners.

With that context in place it is valid to question whether the NFA, which bills itself as Canada’s “largest and most effective advocacy organization representing the interests of firearms owners and users“, press release denouncing both the “clearly deranged individual” and Canada’s gun laws was prudent.

“It is clear that Canada’s excessive firearms control system has failed again,” they wrote the day after the shootings and before Justin Bourque’s apprehension.

The largest and most effective pro-gun organization in history has one simple rule when mass shootings occur: Say Nothing.

The NRA’s policy of silence in the wake of these tragedies seems both wise and prudent.

The NFA chose the death of 3 RCMP members as a vehicle to complain about Canada’s gun laws.

In doing so they (unwittingly or intentionally?) danced on the graves of the dead for political points. We despise Windy Wendy Cukier and her ilk doing that. Now we’ve become her.

Is that really what we want?