That may seem an odd title but it will make sense shortly.

The Ontario Court of Appeal released its decision in R. v. Montague, 2014 ONCA 439, in which the government’s desire to seize Bruce Montague’s complete firearms and ammunition collection came to its unjust conclusion.

Ontario’s Court of Appeal heard arguments for and against the forfeiture of over $100,000 of firearms and ammunition on November 15, 2013. At that time they reserved judgment to give justices Feldman, Gillese and Tulloch time to rationalize the State’s cash grab.

Justice Feldman, writing the appeal court’s unanimous decision, took 32 pages to explain seizing Montague’s entire firearm collection and ammunition was not only constitutional, it was also rational and proportional to the “crime” Bruce and Donna Montague committed.

For those unfamiliar with this case, Bruce Montague traveled across Canada for 18 months seeking arrest for violating Canada’s Firearms Act. Being a man of principle he believed, as I do, that Canada’s Firearms Act violates the rights of those mere citizens who dare own firearms.

Montague believed a constitutional challenge of the Firearms Act would result in the court declaring it unconstitutional, forcing the government to write a more sensible and rational law, one that does not violate our constitutional rights.

To answer question that I need to step away from Bruce Montague’s case and go to Dr. Henry Morgentaler, the abortion issue and the legal term “standing”.

Prior to this ruling, section 251.9 of the Criminal Code,allowed for abortions to be performed at only accredited hospitals with the proper certification of approval from the hospital’s Therapeutic Abortion Committee.

Three doctors, Dr. Henry Morgentaler, Dr. Leslie Frank Smoling and Dr. Robert Scott, set up an abortion clinic in Toronto for the purpose of performing abortions on women who had not received certification from the Therapeutic Abortion Committee, as required under subsection 287(4) of the Criminal Code. In doing so they were attempting to bring public attention to their cause, claiming that a woman should have complete control over the decision on whether to have an abortion.

Abortion was illegal when Morgentaler first opened his Toronto abortion clinic, except in very specific cases and with very specific permissions required. Morgentaler disliked that, and wanted to challenge the constitutionality of Canada’s abortion statute but an individual cannot challenge a law, any law, unless they have what in legal terms is called “standing”.

So Henry Morgentaler broke the law. Repeatedly and across the country. He opened an abortion clinic, performed illegal abortions until police arrested him and charged him with a crime. He then posted bail and repeated the process in another process until his case eventually landed before the Supreme Court of Canada.

The Supreme Court struck down Canada’s abortion law, leaving Canada with no law on abortion at all to this day.

Henry Morgentaler is hailed a hero for his fight for “abortion rights”. He was awarded the Order of Canada “for his commitment to increased health care options for women, his determined efforts to influence Canadian public policy and his leadership in humanist and civil liberties organizations.”

In other words, for daring to violate Section 251 of the Criminal Code of Canada in order to make his point in court.

Without violating that law Henry Morgentaler did not have “standing” to challenge its constitutionality, which brings me back to Bruce Montague.

The issue the courts consistently refused to acknowledge is Bruce Montague specifically and deliberately broke the law in order to challenge the constitutionality of Canada’s Firearms Act, just as Henry Morgentaler did with Canada’s abortion law.

At every level of our justice system, from the Ontario Provincial Police (who used Bruce Montague’s gunsmithing services themselves) and Crown prosecutors to the trial judge, superior court judges and Court of Appeal judges, every single one attempted to paint Bruce Montague as a danger to society; a threat to the nation and a potential terrorist.

Not a single person in the entire justice system ever acknowledged Bruce Montague’s very public protests across the nation or his repeated and public statements against the Firearms Act. 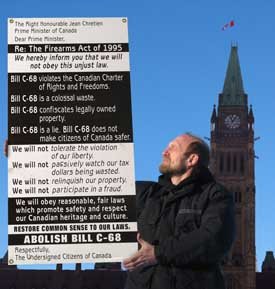 They simply branded him as a terrorist, a threat to public safety, and mainstream media outlets did what they do best; they parroted the party line on Bruce Montague even while running photographs of his public protests alongside their “articles”.

For example, the Court of Appeal in 2010 made this ludicrous statement, as though Bruce Montague actually intended to violently overthrow the government.

In September 2004, acting on the authority of two search warrants, the police seized more than 200 firearms and related devices, together with in excess of 20,000 rounds of ammunition and boxes of military­ related books and associated paraphernalia from the Montagues’ home. Many of these weapons were discovered in a hidden storage room in the basement of the house. It is fair to say that the quantity and nature of the seized arsenal of weapons and associated items may have been sufficient for a small-scale insurrection.

Bruce Montague’s sole desire, as he stated repeatedly and publicly across the nation, was to challenge the constitutionality of a law he felt violated his Charter Rights and Freedoms. He was not preparing to mount a “small-scale insurrection“.

At no point would any level of our justice system acknowledge, just as the Ontario Court of Appeal refused to acknowledge in Monday’s ruling, that Bruce Montague could not challenge the constitutionality of a law without “standing”; without breaking the very law he disagreed with and be charged with a crime.

Henry Morgentaler did so and we rewarded him with the Order of Canada, citing “his determined efforts to influence Canadian public policy”.

He also forfeits his life savings in firearms and ammunition (valued at over $100,000) and that still isn’t enough punishment as far as the government is concerned.

The Government of Ontario, under Ontario’s civil forfeiture law, will now steal the Montague’s family home and acreage valued at roughly $250,000.

By the time our government is done with Bruce and Donna Montague they will be penniless, homeless and jobless, and Canadian judges dare call this “justice“?

Only to fascist thugs who refuse to face the most fundamental fact of this entire case: Bruce Montague used civil disobedience in order to challenge the constitutionality of a bad law.

Anyone who believes Bruce Montague deserved to spend 18 months in prison, forfeit his entire life savings and now forfeit his home and acreage on top of it all clearly checked their humanity at the door.

Yes, I mean you, James McKeachie.

It is in no way “proportional” to the victimless paper crime committed by Bruce Montague. He refused to renew his firearms license. He refused to obtain registration certificates for his firearms. For this he will lose everything he worked his entire life for, including the beautiful log home he literally built with his own two hands.

[50] Some Canadian case-law has held that forfeiture will not be cruel and unusual punishment for someone who deliberately chooses to commit an offence that puts the particular property at risk, regardless of the value of the forfeited property in comparison to the gravity of the offence: see Turner v. Manitoba, 2001 MBCA 207, 160 Man. R. (2d) 256; R. v. Spence, 2004 NLSCTD 113, 238 Nfld. & P.E.I.R. 259.

[51] In this case, it is most unfortunate for the appellants that they chose to challenge the firearms licensing laws by putting all their firearms at risk. However, in my view, the fact that it was their deliberate action that put so much property at risk is not the full reason why its forfeiture does not constitute cruel and unusual punishment. It is because the forfeiture consequences cannot be viewed as grossly disproportionate or even disproportionate at all.

As I said earlier, there is no way to challenge the constitutionality of a law in Canada without breaking that law so you have “standing”.

That is not a choice to put your entire life savings, home and property “at risk”. It’s a decision to challenge an unjust law that unfairly penalizes Canada’s most law-abiding citizens: legal gun owners.

Seriously… who else must pass repeated police background checks and notify the government within 30 days of moving residences or face 2 years in prison?

Certainly not rapists and child molesters.

Forcing them to register is a violation of their civil rights.

Gun owners however, as evidenced by Bruce Montague’s case, have no civil rights. Rendering him penniless and homeless is a rational and proportional punishment for the crime of refusing to obtain a firearms license.

[59]Considering all the factors as they apply to the facts in this case, it cannot be said that the cumulative forfeiture of these weapons would outrage community standards of decency so as to amount to cruel and unusual punishment.

So says the Ontario Court of Appeals, who clearly don’t listen to the Montague’s community members or anyone in Canada’s vast firearms community. Every one of us are outraged at this cruel and unusual punishment that rendered the Bruce and Donna Montague penniless and will soon render them homeless as well.

But once again I forget; we’re gun owners. We are not part of the “community standards of decency“.