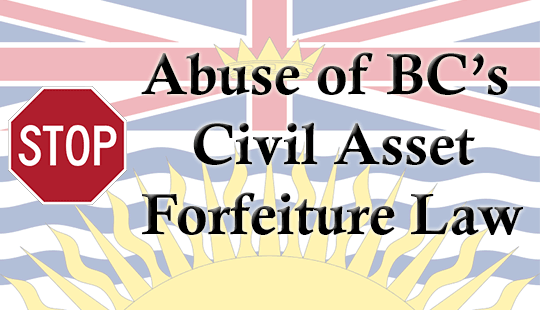 My wife, bless her heart, cuts out articles from the newspaper for me. I’m sure she thinks she’s doing me a favour, but most of the time the articles she cuts out just make my blood boil, such as the article she cut out for me the other day titled “BC Forfeiture Office Defends Its Record” by Ian Mulgrew.

In Mulgrew’s article the head of of BC’s Civil Asset Forfeiture Program, one Phil Tawtel, pontificated at great length why he and his office perform such a “valuable service” to we mere citizens of British Columbia.

Mulgrew’s article containing Tawtel’s defense came in the wake of a number of high-profile civil forfeiture cases where the director had to backpedal. As stated in the article,

Over the past few weeks, Tawtel’s office threw in the towel against David Lloydsmith, a disabled Mission electrician fighting the seizure of his house. The BC Court of Appeal rejected the [civil forfeiture] office’s appeal of a lower court ruling that it defend a series of Charter breaches that occurred in the 2007 RCMP investigation into allegations Lloydsmith was growing marijuana.

While recognizing the law’s aim, the court worried about the imbalance between the province’s immense resources and those of defendants who don’t qualify for legal aid and may not have even been charged with a crime, but face complicated legal proceedings that could cast them dearly.

Since that decision, the director also settled two other cases in the media eye – one involving an older Burnaby couple whose property was in jeopardy despite a criminal court ruling that a forfeiture would be excessive, and another against a Nelson-area acreage owner who had not been charged [with any crimes].

Phil Tawtel believes, it appears, that every mere citizen of British Columbia is fair game, that we are cash machines he can withdraw from as he pleases.

Targeting individuals who have no connection to organized crime or gangs is just part of the job, and it serves them right for coming to his attention, or so his attitude says. In defending his zealous “interpretation” of BC’s civil asset forfeiture law he said,

“How does the director apply fairness and proportionality? Certainly, from Day 1 that is o our mind, from day one when we are looking at a file… that’s key to us.“

Really? It doesn’t look that way to anyone outside your office.

However, to answer your question on “fairness and proportionality” I would suggest, Mr. Tawtel, that you ask yourself this: If you were the one whose home your office is about to steal, would you think it was fair and proportional to the crime with which you were never even charged?

There is the answer to your question, and the honest answer of it is a far cry from your current belief.

The former Edmonton RCMP investigator said that some of the Charger breaches “on the surface are not egregious and its worth… seeing how it plays out.“

Such a cavalier attitude towards the Charter Rights of we mere citizens is frightening. Launching civil forfeiture proceedings are no big deal… he says… we just want to see how it plays out.

The Almighty State decreed through civil forfeiture legislation it can steal any property from any individual any time it wants. If I launch civil forfeiture proceedings against you it’s no big deal as you will have your day in court to explain yourself.

And a massive legal bill but that’s okay; it’s Phil Tawtel’s whim to see how your case “plays out”. Your suffering is inconsequential and of no relevance.

We mere citizens of British Columbia have good reason to be terrified. Power that great wielded without accountability is nothing if not traumatizing to the poor souls crushed under its weight.

Phil Tawtel does not see it that way, of course.

Far from traumatizing defendants, as lawyers claim, litigation provides an opportunity through the discovery process for them to explain, as in “I know what the police told you, but here is my side of the story,” Tawtel said. Though he added, “You often can’t get there and get their information until well after litigation has started.“

Clearly Mr. Tawtel believes that, as a representative of government, he can do what he wants, when he wants, to any mere citizen. If we know what’s good for us we will simply bend over, muffle our cries of pain and say thank you when he’s finished.

Claiming civil forfeiture proceedings do not “traumatize defendants“, I’m sure Mr. Tawtel would view that far differently were it his home attacked by a BC Civil Forfeiture Office seizure order. He would suffer a great deal of trauma at that point. I’m also positive it will take such an action happening to him before Mr. Tawtel will grasp his actions against people, like a disabled electrician, are egregious, severe, cruel and yes, traumatic in the extreme.

“They are making people’s lives a living hell for the period of the litigation and possibly forcing them into a settlement when they know it’s so difficult to prove they haven’t engaged in any wrongdoing,” fumed Lloydsmith’s lawyer Bibhas Vaze.

“(Defendants) throw up their hands and give up. It’s really outrageous.“

The Process Is The Punishment.

Suffer extortion by government decree or lose your home entirely.

As Bruce and Donna Montague’s case in Ontario proves, this is all about money and nothing else.

The Montague family home and acreage, valued at roughly $250,000 faces a seizure order under Ontario’s version of civil forfeiture, its Proceeds of Crime Act. In the Montague’s case government thieves graciously offered to “settle” the case if the Montagues agreed to pay $50,000 in extortion… er… I mean “settlement” fees.

But losing the home you built with your bare hands, as Bruce Montague did, to government extortionists is “not traumatic“, says Phil Tawtel.

As disabled electrician David Lloydsmith’s lawyer stated it is impossible to “prove a negative”. You cannot, for example, prove a fish does not live in the stream running in front of your home. You can only prove it does when you find one. The absence of observable fish does not prove there are no fish.

The trouble with bullies is they never view themselves as bullies.

They always believe their actions are justified. That is even more true when the bully is civil asset forfeiture and those prosecuting the case get paid only when they are successful in seizing assets, as is the case here in BC. The financial incentive to go after any and all cases crossing your desk is overwhelming when your salary is tied directly to how many forfeiture cases you win.

I call it an environment ripe for abuse, which is precisely what is happening here in British Columbia, and that must change.

BC should follow Minnesota’s lead and reform its forfeiture laws so a criminal conviction is required before government can go after property through civil asset forfeiture. As I recently wrote:

Kudos to Minnesota Governor Mark Dayton for signing this into law the moment it hit his desk.

This reform turns civil forfeiture on its head; something long overdue. Current legislation in every other jurisdiction, including here in Canada, requires you to prove you did NOT do something, rather than requiring the State to prove you committed a crime.

You can read more about that standard here: