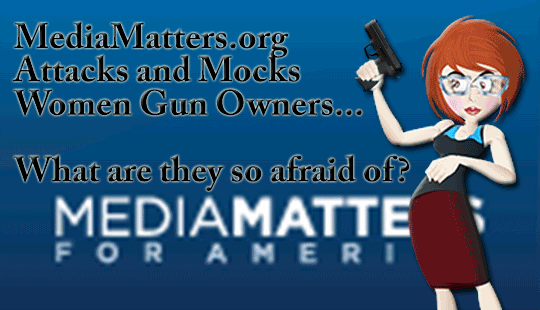 In a disparaging article titled “Meet the Glocker Moms“, MediaMatters.org writer Alexander Zaitchik takes aim at the NRA and its female members. The National Rifle Association held their annual general meeting in Indianapolis, Indiana, and this brought on the attack against both the NRA and its female gun owners.

Why attack women gun owners? According to the NRA, says the article, a full 25% of this year’s attendees were female. Gun-owning moms comprehend that defending their lives and the lives of their children is important. As a demographic women gun owners are growing daily and are now a force to be reckoned with.

That ought to scare the crap out of anti-gun weanies like Mayor Bloomberg.

“The future is about all of the non-traditional groups: single women, the LGBT community, people living in cities, Hispanics who come to this country to enjoy our freedoms, including Second Amendment rights. Those are the only places we can grow. That’s where you find the future of the gun-rights movement.”

As he began packing up his materials, I asked Gottlieb if the rapid adoption of maternal messaging — by the NRA, by the Glocker Moms, by industry — might not betray a fear, or at least a nervousness, that suburban women and mothers, if unchallenged, could swing the political momentum toward serious gun reform.

“Fear? Look around,” he said, gesturing at the bustling arms bazaar extending in every direction.

“No, I really don’t think these guys are too worried about their future.”

There is a joke floating around the internet about a granny who gets pulled over at a traffic stop. The cop asks if there are any firearms in the car. She pulls out a shotgun, a handgun and then another handgun. The cop asks her what she’s so afraid of. Her answer?

“Not a damned thing!”

It’s not about fear. It’s about self-defense and the knowledge that when criminals attack the only ones present are we mere citizens. A mother will defend herself and her children like no other.

Anyone doubting that reality forgets the lesson of Oklahoma’s Sarah Dawn McKinley, the courageous young woman and mother who killed one of the would-be home invaders threatening her and her children. As I wrote then,

Like Sarah and any right-thinking human being, I believe the lives of a mother and her infant son are ALWAYS worth more than the pond scum trying to do them harm.

A mother has a duty to do everything in her power to protect her children. That includes shooting the would-be attackers dead. Anyone who believes otherwise is, to be polite, extremely misguided.

There is, however, one positive note to Zaitchik’s gun-phobic article.

Even the morons at MediaMatters.org like Alexander Zaitchik ought to realize firearm safety is important. Okay, I realize I’m probably giving them more credit than they deserve.

According to these cowards, guns belong in the hands of the police, military and the bodyguards of Very Important Liberals only.

Why do I keep forgetting that?