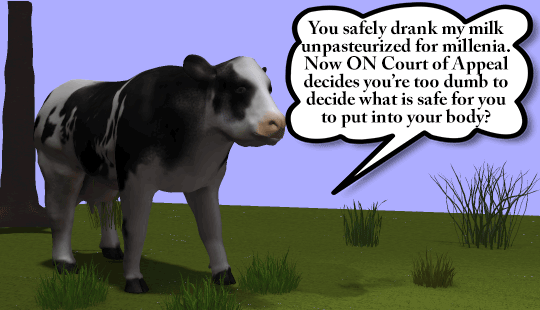 You are not in control of your own body. In fact you’re too stupid to know what food is right for you. Your so-called “healthy choices” are not government-approved; therefore you cannot eat what you want. So says the Ontario Court of Appeal in it’s decision in R. v. Schmidt.

[46] A law is arbitrary where there is “no connection to its objective” (emphasis in original): Bedford v. Canada, 2013 SCC 72 (CanLII), 2013 SCC 72, at para 111. A law is overbroad “where there is no rational connection between the purposes of the law andsome, but not all, of its impacts” (emphasis in original): Bedford, at para 112. The scientific evidence that I have already mentioned easily reaches the standard of “sufficient evidence to give rise to a reasoned apprehension of harm to permit the legislature to act”:Cochrane v. Ontario (A.G.), 2008 ONCA 718 (CanLII), 2008 ONCA 718, at para. 29, leave to appeal refused [2009] SCCA No. 105; R. v. Malmo-Levine at para. 133. The law does not offend the overbreadth principle by targeting all unpasteurized milk.

Dairy farmer Michael Schmidt isn’t a stupid man. In fact he’s quite a smart man. Back in his native Germany he obtained his master’s degree in agriculture.

Upon immigrating to Canada he discovered, to his shock, that as a farmer he could consume all the raw milk he wanted. Should he dare sell that same wholesome nutritious milk to his customers the mighty fist of the Nanny State would descend upon him mercilessly.

Acquitted of all 19 charges at his initial trial, Schmidt found himself at the mercy of Ontario Court of Justice Judge Tetley when the government appealed. Tetley found Michael Schmidt guilty of 13 of the 19 charges he previously was acquitted of and ordered him to pay fines of $9,150.

The Ontario Court of Appeal upheld that decision, deciding unanimously that Canadians have no right to make informed food choices for themselves.

“The decision is deeply disappointing. The government should not be permitted to prevent individuals from choosing a means of promoting their own health when it causes no one any harm.”

“It is indeed a sad reality that the courts do not take the issue of individual liberty serious enough in order to afford informed consumers the freedom to choose.”

Mere citizens are permitted to make crazy and dangerous choices all the time.

One such activity is alpine skiing. You might remember this is how Michel Trudeau, the youngest brother of would-be prime minister Justin Trudeau, died in 1998. He died in an avalanche that swept his body into Kokanee Lake, where it was never recovered.

Did we ban alpine skiing in the wake of Michel Trudeau’s untimely death? Of course not. That would be stupid. Free people make their own choices and pay their own prices. In Michel’s case he paid with his life and there is nothing wrong with that. It’s the cost of being a free person.

Drinking raw milk is a far cry from alpine skiing, yet informed consumers are refused permission to make a healthy choice for themselves and their family.

From the raw-milk-facts.com article “The Health Benefits of Raw Milk”

Few people are aware that clean, raw milk from grass-fed cows was actually used as a medicine in the early part of the last century. That’s right. Milk straight from the udder, a sort of “stem cell” of foods, was used as medicine to treat, and frequently cure some serious chronic diseases. From the time of Hippocrates to until just after World War II, this “white blood” nourished and healed uncounted millions.

Clean raw milk from pastured cows is a complete and properly balanced food. You could live on it exclusively if you had to. Indeed, published accounts exist of people who have done just that. What’s in it that makes it so great? Let’s look at the ingredients to see what makes it such a powerful food.

Our bodies use amino acids as building blocks for protein. Depending on who you ask, we need 20-22 of them for this task. Eight of them are considered essential, in that we have to get them from our food. The remaining 12-14 we can make from the first eight via complex metabolic pathways in our cells.

Raw cow’s milk has all 8 essential amino acids in varying amounts, depending on stage of lactation. About 80% of the proteins in milk are caseins- reasonably heat stable and, for most, easy to digest. The remaining 20% or so are classed as whey proteins, many of which have important physiological effects (bioactivity). Also easy to digest, but very heat-sensitive, these include key enzymes (specialized proteins) and enzyme inhibitors, immunoglobulins (antibodies), metal-binding proteins, vitamin binding proteins and several growth factors.

I highly recommend you read the entire article. It’s quite informative and enlightening, and it has detailed citations for all its sources.

Another credible source on raw milk is Chris Kresser. In his article “Raw Milk Reality: Is Raw Milk Dangerous” he makes a point both the government and media repeatedly “overlook”:

According to the most recent review of foodborne disease outbreaks in the U.S. in 2008 by the Center for Science in the Public Interest (CSPI), seafood, produce and poultry were associated with the most outbreaks. Produce is responsible for the greatest number of illnesses each year (2,062), with nearly twice as many illnesses as poultry (1,112). Dairy products are at the bottom of the list. They cause the fewest outbreaks and illnesses of all the major food categories – beef, eggs, poultry, produce and seafood.

We live in a world where government demands control over our every move. We can do whatever we want, provided we get permission from the Nanny State.

That permission is not extended to food choices, making me question yet again… How free are we really?

For a full background on this case please visit The Canadian Constitution Foundation, aka Freedom’s Defence Team.