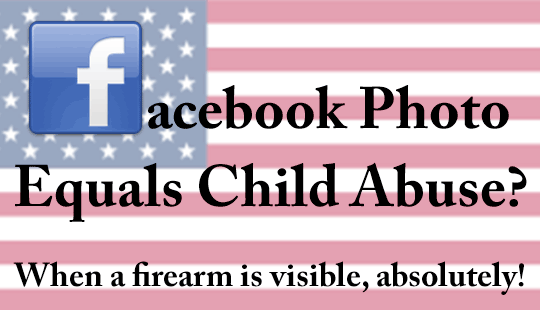 You post an innocent photo of your son holding a rifle on Facebook. Your son is 11 years old. He is well trained in firearm safety by you. His finger is off the trigger in the photo, just as it should be.

Some pathetic crybaby sees the Facebook photo and calls the New Jersey Department of Children and Families who, in turn, contact the police.

Both agencies raid your home and attempt to search it. They demand to see your gun safe and all your firearms for “inspection”. When you refuse to accede to their ridiculous demands because they don’t have a search warrant these so-called authorities label you “unreasonable” and “uncooperative” and say you act “suspiciously”.

Stand up for your rights and you are “unreasonable”.

Demand police respect your rights and you are “suspicious” and “uncooperative”.

Rights are inviolate. Police thugs hate that. Good cops don’t, of course, because they respect your rights but those aren’t the type of police at your door late this night.

However, the police finally do leave, but not before threatening to take your children away from you.

This is no fable; no mere story.

This is precisely the violation Shawn Moore, an NRA-certified firearms instructor and range safety officer, faced last year when some whining little ninny saw a photo on Facebook of Shawn’s son holding a rifle.

In their rush to abuse a law-abiding firearm owner these police state thugs failed to obtain a search warrant. Actually, the more likely scenario is no judge with functional brain cells would issue a search warrant based on such flimsy and absurd “evidence.”

Clearly all common sense vacated the puny brains of the minions at the New Jersey Department of Children and Families and their counterparts in the police department.

Nanny State Minion Kristen Brown, aka spokesperson for New Jersey Department of Children and Families, parroted the usual tripe about “duty” while not comprehending the meaning of the word.

“The department has a child abuse hotline for the state of New Jersey and anybody can make a call to that hotline. We are required to follow up on every single allegation that comes into the central registry. In general our role is to investigate allegations of child abuse and neglect.”

An anonymous phone call complaining of a Facebook photo of a child holding a rifle is considered an allegation of child abuse?