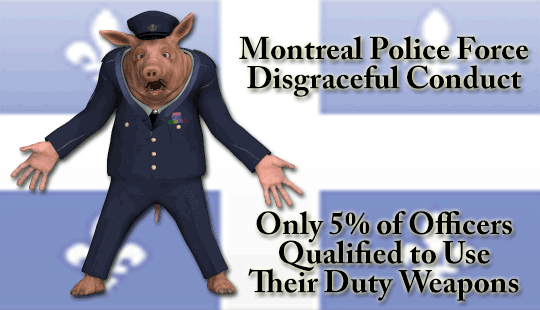 If you live in Montreal you ought to be afraid. Very afraid. Why? Only 250 of 4,600 Montreal Police members bothered to qualify with their duty sidearms.

Police qualification with firearms is required by law, yet only 5% of Montreal’s police force complied with that law.

So what, you ask. There are a lot of cops in Quebec, right? Yes, but give this little tidbit a few moments in your melon. More Montreal cops shoot their weapons in the line of duty than the rest of the province’s police forces combined.

The qualification rate for firearms dropped in the year that followed [coroner] Brochu’s report.

Does that look like the yahoos in charge of the Montreal Police Force took the coroner’s recommendations seriously?

What will it take for anyone at Montreal Police Headquarters to deal with the fact 95% of their membership failed to comply with legislation demanding police officers qualify with their firearms annually?