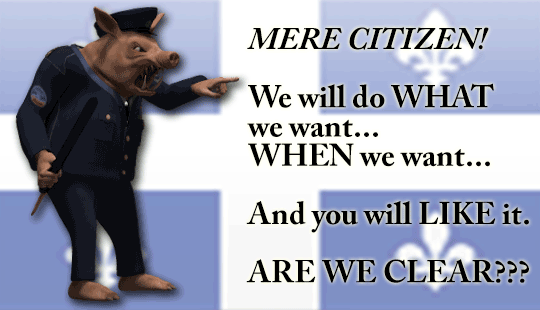 Thomas Harding, as you may know, is the engineer of the train carrying oil that derailed in Lac Megantic, Quebec, leveling the town with the resulting explosion and fire. From the date of that terrible tragedy Thomas Harding avoided public comment at every turn. He cooperated with police and accident investigators fully and completely.

Through his lawyer he even made it clear if he was charged with a crime he would turn himself in willingly.

Such willingness to face the music, to be accountable for one’s actions in such a horrific case as this shows me Thomas Harding must be a man of great character. Whatever his role in the disaster, his steadfast and unwavering determination to be held accountable for his actions that fateful day is to be respected and admired. Few have such courage.

That is precisely the kind of principled man Surete du Quebec thugs humiliated with their high-profile SWAT takedown on May 12th, 2014, at his home in Farnham, Quebec.

Over-compensating for their incredible lack of humanity and armed with both delusions of grandeur and fully-automatic weapons, Surete du Quebec thugs tossed Thomas Harding, his son and a visitor to the ground before they handcuffed him and hauled him off to jail.

It’s no wonder police get stonewalled by actual criminals when they treat a citizen cooperating fully with investigators this atrociously. What incentive is there when no matter how properly you conduct yourself you are still subjected to a heavy-handed, make that obscene display of police power?

Through the media, Surete du Quebec thugs gave a pathetic rationalization for their appalling behaviour, as though they were actually in the right. They were not.

What they conveniently failed to explain is why, if they truly believed Mr. Harding possessed firearms illegally, did they not obtain a search warrant and remove those firearms instead of leaving them in his possession for months?

Most days I feel pretty good about being a Canadian citizen but, upon reading of the treatment of Thomas Harding at the hand of Surete du Quebec thugs carrying their badges and guns, I must confess today is not one of those days.

I am revolted, seeing police resources abused so callously in the name of “public safety” and “concern” for Mr. Harding.

Concern for a person’s well being isn’t usually expressed by pointing a fully-automatic rifle into his face, handcuffing him and hauling him off to jail for a 10-hour interrogation. At least not by my dictionary, and I hope not yours either.

It was intended for you and me, the mere citizens of Canada.

Step out of line and thugs with badges and guns will do the same to us.

Am I over-reacting? I doubt it.

I’m sure some will not agree, however. If you’re one of those people I would ask you to ask yourself one simple question.

Put yourself in Thomas Harding’s shoes.

After you’ve made it clear to police you will turn yourself in whenever you are asked, is it reasonable for authorities to order a “high-risk takedown” by SWAT instead of simply calling you on the phone and saying, “Hey Mr. Harding, would you please come down to the station so we can process your arrest?”

If you answer in the affirmative, then I must seriously question your humanity as I have already questioned that of the badge-wearing thugs of the Surete du Quebec.