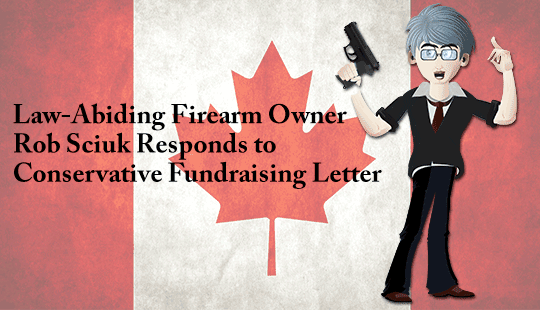 Thank you for your letter dated April 24th asking why my donations to the Conservative party have stopped after years of being considered one of the Conservative Party’s strongest and most reliable Sustaining Donors.

By way of background, Mr. Walsh, I have a university education, and work in the field of software engineering and firmware development in the Canadian high tech industry.  I read two newspapers daily, one as the antidote to the other in order to avoid editorial bias, and I have an active life with two grown children, a wife and my two dogs.

In other words, I want you to know that I am not now and never have been a single issue voter.  But I am a firearm owner, and very active in hunting and the shooting sports, including the use of restricted firearms in competition, both nationally, and internationally.

Recently, the FRT group of the RCMP prohibited two semi-automatic rifles which had previously been non-restricted, and had presented no public safety issues whatsoever.  Apparently these bureaucratic mandarins are not accountable, even to the Minister himself.

My concerns also extend to Mr. Harper’s promise to repeal the entirety of the Liberal’s Canadian Firearms Act, and his decidedly ill-considered approach to ending only the long gun registry.  We are left with a set of regulations and laws in place which will inevitably lead to the confiscation of each and every firearm in Canada within a generation or so, right under the noses of Parliament, and that was what the Canadian Firearms Act was designed to do from the outset.

Newly introduced sections 91 and 92 of the Criminal Code of Canada make the simple possession of a firearm a criminal offense.  The prior regime required did not require a federal license to continually own firearms, but rather a certificate only to obtain one.  This afforded each and every reasonable public safety measure that is attributed to the license (background checks, training, spousal/parental permissions, letters of recommendation, and a mechanism for revocation).

Now, with the expiration of a license, a mere temporal lapse means the difference between me being declared a criminal, subject to the very same mandatory minimum sentences the CONSERVATIVES adopted, without consideration as to whether the so-called criminal actually committed a crime, or simply was made one by the lapse of paperwork.  The laws that the CONSERVATIVES passed make no distinction.

While the Conservatives have performed admirably in many respects, not the least of which financially, and particularly in the light of the recent global economic downturn, I find myself not as trusting in the Conservative agenda, as I once was.

I am extremely disappointed in the fact that the government has allowed bad laws to stand, and instead offering one temporary amnesty after another to keep erstwhile law-abiding citizens out of jail for the crime of simply owning the firearms that they had for generations.

Literally hundreds of thousands of Canadians are now with lapsed licenses, and face criminal sentences in federal prisons. Enough with the damn amnesties.

Arrest each and every one of them or change the stupid laws!

Indeed Sir, the Conservatives have used responsible shooters badly. We have supported you for years, steadfast and  unswerving in our support, and now you have the absolute gall to ask your strongest segment of support why that support might be wavering, having left us in the cold, and one step away from being declared criminals.

Indeed a mere suspicion results in immediate loss of property and ruinous defense costs in the judicial process, which is for the most part, the punishment.

As for my support, Mr Walsh, it is withheld until such time as the real problem, the firearm law and its pursuant regulations are repaired.

I would expect that the ability for nameless bureaucrats to confiscate my property without recourse or accountability would be eliminated, and their ability to enact such creeping confiscation would end forthwith.

In addition, in keeping with a liberal democracy, Parliamentary oversight would be required before any property would be banned from ownership, and that the right for responsible individuals to retain arms for any legitimate purpose, including self-defense to be recognized and respected.

Until such time, you might consider me to be a former supporter, both financially, and at the polls.

While I regret this turn of events, I have no choice but to take this position, and to widely encourage others to do the same.

Given that I am technically inclined, this is a simple message to disseminate widely, and I’m sure that you will not be surprised to learn that it is an increasingly popular position among the Conservative formerly faithful firearms owners.

We feel that we have been treated badly, and indeed, Sir, we have!