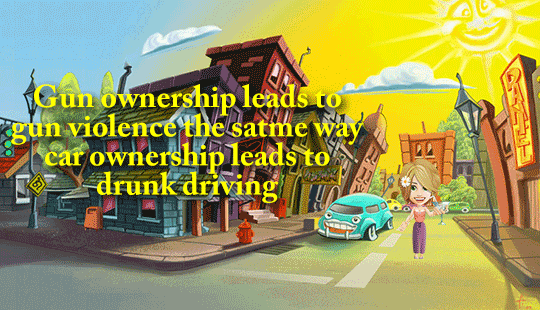 Rauch’s article came in response to doctors claims they discovered something new about gun violence, namely that gun ownership leads to gun violence, when in reality they merely twisted the facts to meet their own preconceived notions.

Anti-gun activists are not interested in data that doesn’t support their case, so they twist the information instead, making it appear to say something that it most certainly does not. This is neither scientific nor honest. It is nothing but political propaganda, being delivered by a “trusted authority” in a white lab coat.

While I urge you to read Eric Rauch’s entire article, here is just a little of his response to these so-called experts.

“Wow. In a nation of gunowners, where it is estimated that the number of guns is between 260-300 million (it is probably even higher than this), it is somehow statistically relevant that gun ownership precedes gun violence. This fact is about as helpful as the fact that car ownership tends to precede auto fatalities, or that home ownership precedes house fire deaths; one does not predict the other.

The FBI estimates that two-thirds of all homicides are committed with guns, yet only 9% of violent crimes actually involve guns. This is highly significant. A homicide is a violent crime where a death results. This would fall into the 9% category. However, attempted homicide, robberies, carjackings, domestic disputes, gang violence, etc, that involve guns also are a part of that 9%. This means that 89% of violent crime does not involve a gun.

In a nation where guns number almost 1:1 of the population, this lack of correlation is much more important than the miniscule relationship where they do seem to correlate.“

It is significant that in a nation of over 300 million people guns are used in violent crimes only 9% of the time. That’s a far cry from the incessant wailing that America is drowning in “gun violence”, isn’t int?

If you dig deeper into those “gun crime” statistics a few other things are quite apparent. I will leave you to discover those facts for yourself, lest you feel a need to label me racist or hateful or some other derogatory name. (While you’re looking into such matters, take a look at “gun crime” in the greater Toronto area… you will discover the very same trend.)

Eric Rauch goes on to mock their “findings” with a few of his own, such as

“Without seeing the data, I can confidently predict that 100% of violent crimes involve people. Of those 100%, every one of them had parents. This seems to be a much stronger predictor than gun ownership: having parents always precedes violent crime. In fact, having parents is a precursor to any kind of crime, not only violent ones. This is the real epidemic. Why can’t these doctors see this as the real problem?“

A gun is simply a tool. It can be used for good or evil. It has no morality of its own. That morality is reserved for the human being, of which 100% are involved in “gun violence” and in fact in all violence.

Let me give you an example.

I can take a handgun out of my gun safe, load it, chamber a round, cock the trigger and put it down on my kitchen table. If I felt so inclined I could even point it directly at myself.

I am 100% confident my gun will not shoot me. In fact it will sit on that table pointing at me for the rest of my life unless some human being comes along and picks it up.

Whether that loaded gun will be used for good or evil depends 100% on that individual.

Cars cause drunk driving like spoons made Rosie O’Donnell fat; like gun ownership makes “gun criminals”. One simply does not lead to the other.

Why is this so hard for so many to comprehend?