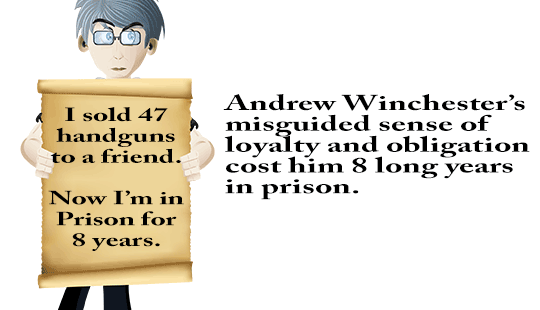 Andrew Winchester is a stupid person.

I call Andrew Winchester a stupid person because only an idiot would believe handing over 47 handguns, all legally purchased and registered to him, to an unlicensed individual wouldn’t have severe consequences. You would think being paid $900 per purchase over and above the cost of the guns and ammunition just might be a clue something is not quite legal.

In order to work for his previous employer, Garda Security, he took the Canadian Firearms Safety Course for both non-restricted and restricted firearms. He passed the course, applied for and was issued a Canadian firearms license.

He then purchased 47 handguns over a 5-month period and re-sold them to a friend of his. His friend did not have a firearms license. Selling 47 handguns to his unlicensed friend is a criminal offense.

The Criminal Code of Canada is quite clear about the transfer of handguns or as the law refers to them, restricted firearms.

As you can see above, Andrew Winchester broke every single part of this section of law.

[17] There are a number of aggravating circumstances in this case, most of which are self-evident. First, Mr. Winchester used his firearms licence to purchase and then transfer forty-three handguns to another person, his presumed friend, Nour Marakah. Second, Mr. Winchester transferred these handguns knowing that Mr. Marakah would, in turn, be providing them to another person. It must have at least crossed Mr. Winchester’s mind that these were not guns that were being acquired for lawful or innocent purposes. If that thought did not cross Mr. Winchester’s mind, it ought to have. Third, Mr. Winchester undertook these purchases with an assurance from Mr. Marakah that the firearms would not be traceable back to him. This was yet a further reason that should have caused Mr. Winchester to question what was, in reality, going on. It also should have caused him to rethink his participation in this venture.

It is unfortunate that Andrew Winchesters two sons will be without their father for the next six years (He received 2.5 years credit for time served before his trial), but such is the high price of stupidity.

Mr. Winchester is, however, fortunate Superior Court Justice Ian Nordheimer laughed at Crown’s retarded argument that his lack of a prior criminal record should be viewed as an “aggravating circumstance” at sentencing.

I doubt Andrew Winchester views the $15,000 he received as payment for purchasing the handguns was worth it as he sits in a federal prison cell.

He would be correct.