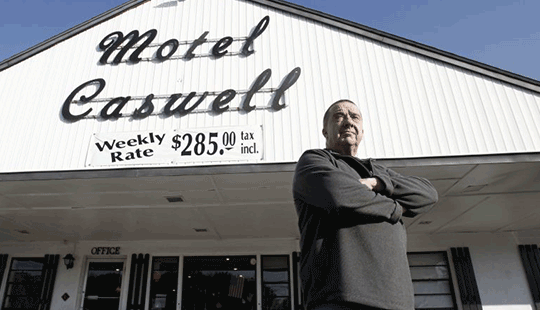 Russ Caswell, now 70, spent the last two years fighting local, state and federal agencies over who owns Motel Caswell, the motel owned by his family since 1955.

I first wrote about Russ Caswell and his civil asset forfeiture nightmare on July 1, 2012 when his case broke internationally. From that article:

It is now, like many older motels across the nation, home to lower-income people such as seniors, as well as temporary workers who pay by the week or month.

Why is this significant? Since Caswell’s property has no mortgage the State can keep the entire proceeds of the sale of the property after they steal it from him. Of course they don’t call it theft or stealing… they call it cracking down on crime.

In the case of Russ Caswell, it makes absolutely no difference that he has never been charged with a crime. In fact, it’s not any actions of his that concerns the thieving police and federal justice department.

The US Justice Department and its thieving local counterpart, the Tewksbury Police Department, contend that Caswell is responsible for what people do in his motel rooms every minute of every day. His motel rooms were used to “facilitate” the crime of drug dealing, therefore the motel is guilty and must be seized as proceeds of crime.

Police and government officials, thieving scumbags each and every one, decided that Caswell’s property should be theirs so they set out to steal the Caswell family motel using one of the most abused laws ever devised: civil asset forfeiture.

The notion that you can “take the profit out of crime” by seizing the assets of criminals seems noble enough, but only if you accept without question the rhetoric and sound-bytes used to sell this atrocious legislation.

You may never be charged with a crime, let alone be convicted of one, before government thieves seize your property. That ought to terrify even the most law-abiding and pro-government among us.

In Caswell’s case thieving police and prosecutors don’t care that Caswell never committed a crime. That’s entirely beside the point.

The accusation against Russ Caswell isn’t that he didn’t do enough to help police crack down on crime in his motel. That is utter garbage if not an outright lie. Russ Caswell installed video cameras, recorded license plate numbers and customer identification, gave police free rooms for their sting operations… in fact he did everything ever asked of him by law enforcement.

That wasn’t enough. Now the Tewksbury Police Department thieves, along with state and federal counterparts, insist the Caswell’s must give up their home and livelihood too.

“I’ve found, which is kind of hard to believe, but I’m responsible for the action of people I don’t even know, I’ve never even met, and for the most part I have no control over them,” Caswell said in court. “And I have to rent them a room unless I have a real good reason not to or I get accused of discrimination and that kind of thing.”

“And when they do something wrong, the government wants to steal my property for the actions of those people, which to me makes absolutely no sense,” he added. “It’s more like we’re in Russia or Venezuela or something.”

The government thieves have three things on their side:

2. Police and Prosecutors keep most of the money and assets they seize. Legislation is often written giving police and prosecutors 100% of what they steal, and

3. The burden of proof is far lower for a civil action than a criminal prosecution. Under civil asset forfeiture police and prosecutors must never prove guilt, obtain a conviction or even file criminal charges before they seize private property. The term “on a balance of probabilities‘ is the phrase used to rationalize theft of private property.

This turns the notion of justice on its head. The accused must prove they did not commit a crime. How you prove you haven’t done something is… well… beside the point, right? Proving a negative isn’t possible.

Wrong. So utterly and completely wrong. The Caswell family didn’t do anything wrong. In fact they did everything asked of them by law enforcement. That wasn’t enough, and there is a very simple explanation for why.

Statistics from the United States are utterly terrifying.

In 1985, the U.S. Department of Justice created its Asset Forfeiture Fund. One year later, the fund — which holds the proceeds from seized property and is available to be divvied out to law enforcement agencies — brought in $93.7 million. In 2008, the amount had ballooned to $1.6 billion. In 2013, it reached $6.3 billion.

The incentive here is cash. Boatloads of cash. Cash for police departments and prosecutors’ offices. Cash that is used to pad government budgets because government must always get bigger, not smaller, when it’s not being used to pay lavish expenses for corrupt prosecutors, that is.

An investigation conducted by the Atlanta Journal-Constitution looked into how funds over a five-year period were spent in Georgia. According to the newspaper, Fulton County District Attorney Paul Howard spent thousands of dollars gleaned from civil forfeitures on pricey dinners and an elaborate home security system for himself. In November 2009, he allegedly paid $800 to rent out a movie theater. Three months later, Howard told his employees they’d have to take 10 furlough days due to budget constraints.

Motel Caswell is valued at $1.5 millon.

The greedy thugs of the Tewksbury Police Department saw a way to raise over 25% of their annual budget with the theft of a single property.

These greedy little pigs desperately need a refresher in Peel’s 9 Principles of Policing.

The concept of a limited government is so old fashioned, isn’t it? It shouldn’t be. The goal of every responsible government is to pare down its thievery from we mere citizens, not expand it to the point we have nothing left to feed the monstrous behemoth.

Civil forfeiture laws in America are almost 3 decades old. That’s a generation of police and prosecutors used to stealing from we mere citizens whenever the mood strikes them. At $6.3 billion stolen from mere citizens in 2013 alone, the mood clearly strikes them regularly.

In Russ Caswell’s case a federal judge finally applied some common sense to his situation.

After a four-day trial, on Jan. 24, 2013, a federal judge in Boston dismissed the forfeiture action against the motel, ruling that the government engaged in “gross exaggeration” of the evidence and did not have authority to seize the property.

In short, both police and multiple layers of government overstepped their bounds. Again. They chose their greed ahead of their duty and responsibility to those mere citizens whom they feel free to abuse so mercilessly.

Larry Salzman, an attorney with the Institute for Justice, took on Caswell’s case pro bono.

The attempted theft of Motel Caswell from Russ Caswell and his family is, as the title of the free book from The Institute for Justice says, nothing more than Policing for Profit: the Abuse of Civil Asset Forfeiture.

I urge you to download and read this free book from The Institute for Justice. Then contact your elected representative and demand they reform civil asset forfeiture law in your jurisdiction. Don’t kid yourself. It will be an uphill battle. Police and government look at civil asset forfeiture as “free money” and they won’t give it up willingly.

Here in British Columbia, for example, the cash incentive is the primary motivation for civil asset forfeiture. The government doesn’t handle the thefts itself, however. It farms out the work to other lawyers.

Here’s the catch though… those lawyers only get paid if they are successful in stealing property from some hapless mere citizen. It matters not whether that person is an actual criminal or not…

Private property should never be forfeited unless it is proven in a court of law that a crime was committed and that the individual in question profited from that crime. This would, of course, require we drag our justice system back to its noble beginnings.

Remember the days where you were innocent until proven guilty in a court of law?

Yet today, the government in America seems more like the former enemies we vanquished than the place of life, liberty and the pursuit of happiness the Framers established.