It’s a simple, common-sense ruling, and one founded in that most basic right of all, Freedom of Speech.  Just like honking your horn as you pass by people holding a sign like “Honk if you Support Our Troops” is legal, so is flashing your lights to warn oncoming drivers of police in their path.

Hauling a truckload of logs to a Southern Oregon mill last fall, Chris Hill noticed a sheriff’s deputy behind him and flashed his lights to warn a UPS driver coming the other way.

The deputy pulled over Hill on U.S. Highway 140 in White City and handed him a $260 ticket for improperly using his headlights, saying another deputy had seen the flashing lights from behind the UPS truck and alerted him to stop the log truck because of the signaling.

Chris Hill, outraged at being ticketed for expressing himself, fought the ticket in court and in early April, 2014 Judge Carter dismissed the traffic citation.

Judge Joseph Carter determined the law covering the use of high beams was valid, but was unconstitutional as it was applied by the deputy.

“The citation was clearly given to punish the Defendant for that expression,” the judge wrote.

In this age of “revenue by traffic citation” it is very refreshing to see a judge uphold the rights of a mere citizen against the almighty Minions of the State.

Common sense says one should drive with low-beam headlights when there is oncoming traffic.  The law supporting that also makes sense, as it can be a danger to others when someone is blinded by oncoming high-beams.  However, common sense flies out the window when that law is used to punish a mere citizen for exercising his or her Right to Freedom of Speech simply because the mechanism of that Free Speech is flashing one’s high-beams.

Dave Fidanque, director of the American Civil Liberties Union of Oregon, noted the Oregon Court of Appeals overturned a traffic law prohibiting horn honking for non-traffic purposes on similar grounds in the 1990s after a number of people got tickets for honking in support of U.S. troops during the Gulf War.

“If the motive of the sheriff’s deputies was in fact not to make the roads safer, but to raise more revenue from traffic enforcement, that would be even more reason why it should be  unconstitutional,” Fidanque said. “If this is part of a pattern, then it probably would be worth us looking into it in more detail.”

Free Speech takes many forms.  It appears the minions of the almighty state don’t like we mere citizens exercising that right in as many ways as possible.  Thank God for judges like Oregon Judge Joseph Carter, who takes the concept of Free Speech seriously, just as he should. 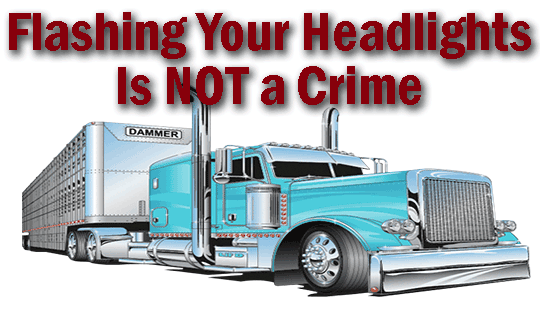 Traffic rules applied solely for the purpose of generating revenue for the State is a heinous affront to liberty.  This affront is not unique to Oregon or even America.  It happens routinely here in Canada as well.

Recently there was an expose on Sun TV about a man who spends his free time recording police making traffic stops on a particularly stupid street in one of Ontario’s urban centers.

There is a no left turn sign at a particular intersection.  Obeying that sign means a long circuitous detour to get there.  Disobeying it means chancing an expensive ticket, and given the visibility of police down the street from that intersection it’s become a favourite spot to generate revenue for the city.