The following is from a post on Facebook by Dr. Mike Ackermann in response to a question from a new shooter about what she should do before purchasing her first firearm. I believe it is a “must-read” for everyone, shooter or not.

1) All lawful shooters are our friends.

I support them all, even if someone else’s sport is something I do not personally like. For example, I don’t particularly like trophy hunting, but as long as it is done ethically and legally I realize that it adds financial value to maintaining healthy animal populations and ecosystems, creates jobs in otherwise impoverished areas, and huge injections of funds into local economies and conservation programs.

Guns have no volition of their own. They are just tools that will do what we ask of them. There is a huge range of interest in everything from single shot black powder antique muzzle loaders to fully auto, belt fed, crew served machine guns, and everything in between. All lawful gun use is good, even those activities I personally have no time for, interest in, or money for, and I support them all.

3) Guns are designed for a single purpose, and that is NOT “to kill”.

Guns are designed to launch projectiles in order to protect human and livestock life from predation, to provide food for the table, to help their owners win competitions, and to advance the engineering evolution of the industry. They are no more purposefully designed kill than are knives or baseball bats.

4) Assault is a verb, not an adjective.

There is no such thing as an “assault weapon“. That is a term invented by the anti-gun lobby to besmirch us in the minds of the non-shooters and to make them fear us. The proper terms are “modern battle rifle“, “personal defense firearm“, and “modern sporting rifle“.

5) Anything is a weapon when used to assault someone or some animal.

The anti-gun lobby has called our tools “weapons” for a couple decades now. We should not help them denigrate us. I call my guns “guns” or “firearms“.

6) Guns do not have morality.

Anything can be used for good, unintentionally misused to cause harm, or intentionally abused for evil. The gun has no morality and is vastly more often safely used than misused or abused.

7) Firearms are the Great Equalizer.

Guns are the only tools that allow the old, the ill, the weak, the small, the female, and the few to effectively defend themselves against the young, healthy, strong, large, male mob intent on harming them.

8) Police have no Magic Abilities or Special Powers.

A cop is just a high school graduate who passed a security check, with 20 hours of firearm training divided into 15 hours classroom and 5 hours on the range. They have no special secret powers. Most never handle their firearms outside of mandatory annual qualifications that require them to hit a human sized target from contact range to 7 meters.

Compared to this, most lawful shooters will have much broader and deeper knowledge and experience with firearms than the police. The lawful gun owner is 1/3 as likely as the general population and 1/2 as likely as the police to ever be involved in criminal violence.

The public has no problem allowing the police to carry guns in public and yet for some strange reason the thought of one of us doing so has them, the police, quaking in fear.

When someone calls 911, what they want is for someone else to bring a gun to their aid; a gun that would be much more useful in their hand at the moment when they are in the act of being attacked than in the holster of a cop who is, at best, several minutes away.

The bad guy is always the one to choose the time, manner, and place of their attack, and they will always do so to maximize their chances of success, not yours or the police’s.

If all you do is call 911, you will wait the rest of your tragically prematurely truncated life for help that will inevitably arrive in time to gather evidence from your body for presentation in court later.

Every jurisdiction that has gotten out of the way of lawful, trained, effective personal defense (AKA concealed carry) has seen huge declines in criminal violence.

All the mass killings are in “Gun-Free Zones“. 95% of violence in America occurs in 5% of the land area, and those areas are typically “gun free” inner city.

10) “If it just saves one life then it’s worth it” is a propaganda slogan.

The anti-gun lobby attempts to claim the moral high ground, stating that “if it just saves one life then it’s worth it” to destroy the rights of millions to effectively defend themselves in order to futilely abuse the legal process to try to stop a few murders, and at a huge cost in life and freedom.

The anti-gun lobby projects their own terrified self-image onto us. They are the ones who would be dangerous with a gun, who are filled with impotent rage, not us.

Thus endeth today’s lesson. I hope you find it informative.

Your homework, should you so desire is to read this: 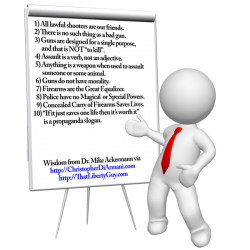 “Hope for the best, but be prepared for the worst”.