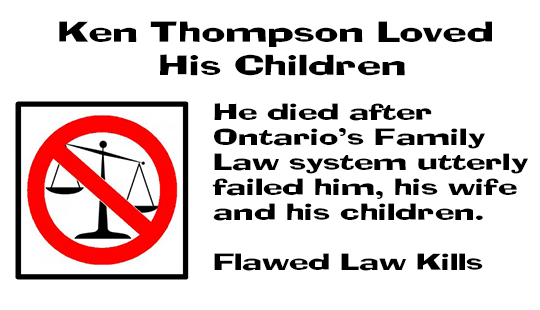 I admit I never gave much thought to Family Law. Like many people looking from the outside in, I figured our court system was designed to serve justice, and I thought that people who complained about it were probably just disgruntled about their own obligations. I was brought up to take responsibility for my actions and to respect authority. Of course, once I myself was thrust into the family courts, I quickly learned that not all authority respects me.

Now that I find myself part of the growing cry for the reform of our Family Court system, people often share emotional stories with me about how this system has treated them. I always try to remind myself that for every story there are two sides. But in fact, there are more than two sides whenever children are involved.

And I am seeing more and more of the impetus for reform coming from the very children who were left to grow up with the decisions of our dysfunctional system. They are realizing what was taken from them, and they are asking questions.

Trena Thompson, now a mother herself, is one of those children. She has been speaking out in honour of her late father, Ken Thompson. She is not only talking about systemic abuse, she has the documents to prove it. After his death, Trena discovered that her father had hidden over 500 of his documents amongst her own files. It is a paper trail which tells clearly the story of one of the worst cases of abuse of power orchestrated against a man whose only wish was to be a dad.

Trena wants her father to be honoured and recognized as a hero to all other parents who have endured such oppression.

“He saved his files for a reason, stuck them in with mine to help us all. I want to see that it is used as a perfect example as to how flawed the current system is.“

The systemic collapse of justice in the town of Sarnia is more than evident in the fact that Trena’s father was given two different identities. Two names were submitted: Kenneth John Thompson and John K. Thompson. And this led to two different case numbers being created by the Family Responsibility Office, which in turn resulted in the demand for two different child support payments from the same man. His attempts to correct this deceitful error went on for years.

The Family Responsibility Office was relentless in its efforts to collect the extra payments, disregarding what should have been a simple clerical error, and sending him back to court where lawyers and judges failed to question or prevent the ongoing disparagement of his character.

Every time Ken Thompson took steps to free himself from the dysfunctional system, he was punished. Lawyers filed documents suggesting that he was mentally ill when he wrote letters asking to visit his own children.

Trena grew up being told

“Your dad is going to steal you… you should run away whenever you see him.”

Ken Thompson died of a myocardial infraction, which is a technical term for a heart attack, but I think it really is as simple as calling it a broken heart.

“Without a doubt in my mind both heart attacks were induced by the stress, false allegations and fraud the courts were putting him through. The oppression of it all is enough to make the strongest sick. My dad used to always ride a bike, ate healthy, and had his black belt. His first heart attack came a year and a half after the first allegation of him sexually abusing me. Breaks my heart because I know my dad didn’t do that,” says Trena, in a video she made to courageously share his story.

She is determined to continue his struggle for justice, because even after all these years, the system has not changed.

As I consider Trena’s case, I have questions I cannot answer. How does something like this happen? Why are good parents treated like guilty deadbeats?

Ken Thompson loved his children. He worked earnestly to provide for them. Plenty of good people face divorce. And good people want to take care of their children. When they go to Family Court seeking resolution, why are they served with retribution?

When the Family Responsibility Office was mandated to enforce court-ordered family support payments, it was handed exceptional power. As long as their procedural requirements are met, FRO employees are allowed to blindly disregard basic human respect and compassion. And they will be the first to tell you that it is the Family Court that hands them the paperwork needed to wield this power. It is much like a bulldozer set in motion without consideration as to what may be in its path.

But who takes responsibility for the effects of a biased court ruling? Is it up to a cash-strapped parent to siphon more of their funds into the system and away from their children? Where does someone turn when mistakes are made? We have no checks and balances. There is nothing to protect a parent from being villainized by an emotional ex-spouse. There is no way to ensure that the court’s decisions are fair.

Judges and lawyers too often benefit from motivation that has little to do with the well-being of the children. Make no mistake: children are hurt when the very people that should be keeping them safe from harm are allowed to use them as a possession.

Personally, I have asked more than one Family Law lawyer whether they feel our current system is flawed. “Off the record”, they readily agree that it is. But when I’ve asked them why they don’t speak up and become a part of the solution instead of the problem, the conversation always ceases. I guess, after all, lawyers thrive on conflict. It’s a plain fact that the more complicated the case, the more money the lawyers make.

Judges are not motivated to make changes either. A cookie cutter approach facilitated by no-fault divorce seems to have made their job simple.

And this is another question I cannot answer: If the divorce act is a no-fault system, why are allegations even considered in Family Court to begin with?

Indeed, if a serious allegation such as sexual abuse has been put on the table, does this not deserve to be addressed in Criminal Court? And then if a conviction is made, such information can be entered into the Family Court case with true authority to protect the innocent.

On the other hand, where is the protection from a parent who is committing the offence of false allegations? Should mere allegations be all that is required for a child to be taken away from a parent?

Parental alienation creates lifelong scars. From Trena Thompson’s perspective, the Family Court ultimately alienated her from both of her parents. She was deprived of her father because of unsubstantiated allegations and her mother was taken from her by the adversarial approach that our Family Court thrives on.

“I hope this whole situation is used as a example as to why they must stop creating and enabling conflict within families,” she comments.

Trena also recalls her dad’s integrity through it all.

“In all the years my mom hurt my dad he never spoke ill of her, just honestly. He would always tell me that she was not always like that.”