Bill C-13 – dubbed the “Protecting Canadians from Online Crime Act” is really an attempt by our so-called Conservative government to re-introduce measures from their failed Bill C-30, “Protecting Children from Internet Predators Act”.

You remember that one, right?

That’s the bill where then-Public Safety Minister Vic Toews said you either sided with the government (and abdicated your Right to Privacy) or you sided with child pornographers.

You either embraced warrantless searches or you sided with child pornographers.

You either give up your rights or you are no better than child pornographers.

Refusing to give up my Rights means no such thing.

That stance does not change simply because the Steven Harper shuffled the deck chairs and there are new faces sitting in the seats of the Minister of Justice and the Minister of Public Safety.

That stance does not change simply because they want to re-introduce atrocious portions of failed legislation under a new name and bill number.

My right to privacy will not be sacrificed under Bill C-13, “Protecting Canadians from Online Crime Act”, whose much less catchy name is “An Act to amend the Criminal Code, the Canada Evidence Act, the Competition Act and the Mutual Legal Assistance in Criminal Matters Act”.

The text below is from the introduction to Bill C-13, the “Protecting Canadians from Online Crime Act”.

This enactment amends the Criminal Code to provide, most notably, for

(a) a new offence of non-consensual distribution of intimate images as well as complementary amendments to authorize the removal of such images from the Internet and the recovery of expenses incurred to obtain the removal of such images, the forfeiture of property used in the commission of the offence, a recognizance order to be issued to prevent the distribution of such images and the restriction of the use of a computer or the Internet by a convicted offender; (Note: cyber-bullying and privacy violations)

(b) the power to make preservation demands and orders to compel the preservation of electronic evidence; (Note: “compel” means charge you criminally if you refuse their “demand”)

(c) new production orders to compel the production of data relating to the transmission of communications and the location of transactions, individuals or things; (Note: failure to follow a production order is in itself a criminal offense.)

(d) a warrant that will extend the current investigative power for data associated with telephones to transmission data relating to all means of telecommunications;

The enactment amends the Canada Evidence Act to ensure that the spouse is a competent and compellable witness for the prosecution with respect to the new offence of non-consensual distribution of intimate images.

Bill C-13 is about far more than cyber-bullying.

Of the cyber-bullying aspect of Bill C-13 Tim Banks of PrivacyAndDataSecurityLaw.com writes,

Whether the original image results from misplaced trust in a partner, a lack of judgment, deliberate risk taking, or coercion, the act of distributing intimate photos or videos without consent can have serious social and economic consequences for the individual whose image is being circulated.

However, criminal law is a blunt instrument to deal with these problems, and Bill C-13 is no exception. The legislation would criminalize any distribution of intimate material without consent irrespective of the motives of the individual who distributes the material.

Perhaps in an attempt to balance issues of freedom of expression, Bill C-13 requires the victim to have had a reasonable expectation of privacy both at the time that the image was taken and at the time the image is distributed. Even then, the distribution of the image will not be criminal if it is for the “public good”.

As Tim says, this is tough legislation to get right, so why compound this problem by adding the kitchen sink into the bill?

To quote Terry Wilson of CanadianAwareness.org,

This is almost word for word, the same legislation as the former Bill C-30. It is a highly dangerous piece of legislation that in all honestly is not needed for cyberbullying, unlike what the government would have you believe. Laws to arrest the people involved in the cases of Amanda Todd and Rehtaeh Parsons (who are being held up as the “poster” children for this legislation) where already in place. The police just simply did not act.

Write Justice Minister Peter MacKay and demand this bill be rescinded and replaced with a bill that deals specifically and only with cyber-bullying.

Write Prime Minister Stephen Harper and demand this bill be rescinded and replaced with a bill that deals specifically and only with cyber-bullying.

Write your MP today and demand this bill be rescinded and replaced with a bill that deals specifically and only with cyber-bullying.

Make these people aware your support for this Conservative government depends upon this government’s respect for the rights of all Canadians while dealing with the cyber-bullying issue.

OpenMedia.ca is once again leading the charge.  From their website:

The government is about to ram through a new law which provides immunity to telecom companies that hand over our sensitive information without our knowledge or consent.

We’re at a crucial stage in this fight; with the government imposing time allocation motions and closure to severly restrict debate,  now more than ever we must ensure that pro-privacy voices are heard by decision makers in Parliament. Your support today will enable us to make sure your voices are heard in Ottawa. 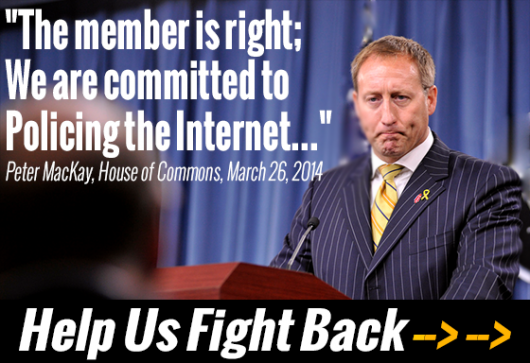