The subjugation of men in the Family Courts is prevalent across Canada. The Family Law Act in Ontario is supposed to encourage and strengthen the role of the family, but nothing could be farther from the truth.

This is a systemic problem that is not only creating financial hardship for families, but is costing our society the ultimate currency of lives.Men in Ontario are 3.2 times more likely to commit suicide than women. Ask anyone who has been through the system and you can be sure they will have a horror story that will scare you to death.

Bill C-560, An Act to amend the Divorce Act (equal parenting), is only the tip of the iceberg, addressing one problem only: equal parenting.

This enactment amends the Divorce Act to replace the concept of “custody orders” with that of “parenting orders”. It instructs judges, when making a parenting order, to apply the principle of equal parenting unless it is established that the best interests of the child would be substantially enhanced by allocating parental responsibility other than equally.

Presently there is no accountability in the system because we have been forced to subscribe to a no-fault divorce approach. To infer that no one is at fault in the breakdown of a marriage allows the courts to use a cookie cutter approach to resolve conflict, which is only a matter of convenience for the courts.

While the purpose behind the no-fault divorce was to facilitate a clean break resolution, the reality is that every case that makes its way to Family Court is unique and should be decided on its merits.

Mediation should be the primary means of conflict resolution and the courts should only be used to decide outstanding issues after exhausting other avenues.

Accusations are not facts.

It is common practice to inundate court documents with allegations of abuse. Terms like “passively aggressive” or “mental and verbal abuse” are tossed around freely without having to substantiate any of these claims. This approach deliberately puts the other party on the defensive right from the start.

Past practice has been to make false allegations and use them to award one parent custody. I suggest that if there is any allegation of abuse it is to be taken seriously and dealt with in the criminal courts where facts trump allegations.

Once dealt with in the criminal courts, then Family Court would be dealing only with facts and not allegations, which would help to ensure the protection of the children. If children are involved they have to be the priority no matter what.

Divorce has become an industry in itself, financially exploiting hard-working families, and filling the pockets of those who abuse the court system.

For example, another common practice is to use a 20-year marriage as a cash-for-life proposition (even though there is nothing in the Divorce Act which actually specifies lifetime payments be made on a marriage of 20 years or over). This is clearly discrimination, and it amounts to modern day slavery.

Spousal support is intended to relieve economic hardship arising from the breakdown of the marriage and promote the economic self-sufficiency of each spouse within a reasonable period of time. Having to make lifetime payments is not reasonable.

I would suggest using the formula of 6 months per year of marriage. For example, if a couple were married for 20 years, spousal support would be terminated after 10 years of payments. This provides ample time for self sufficiency and also allows the payor to have some type of future.

The court should also ensure that the recipient spouse does not perpetuate this support by refusing to go to work or to retrain.

Spousal support is not a career choice.

Any person who works hard to provide for their family should be respected, not treated like a potential “deadbeat”. Opting in to Family Responsibility Office should be the standard in Ontario. No one should be forced to participate in a system that is flawed.

In my case, it took 67 days for Family Responsibility Office to provide me with a case number, and this automatically placed me in the “arrears” category, which gave them the power to garnishee my wages. I had to fight to have this error corrected.

When I requested information through the Freedom of Information Act from Family Responsibility Office, I met with not only roadblocks but threats.

I would suggest a comprehensive review of the Family Responsibility Office, and a means to hold them accountable for their actions.

This is but a short list of my concerns.

It is very clear that the Divorce Act needs to be modernized to reflect the families of today.
Ask anyone with experience in this area of law if they think Family Law provides justice and I venture to say that the overwhelming answer would be “No”. 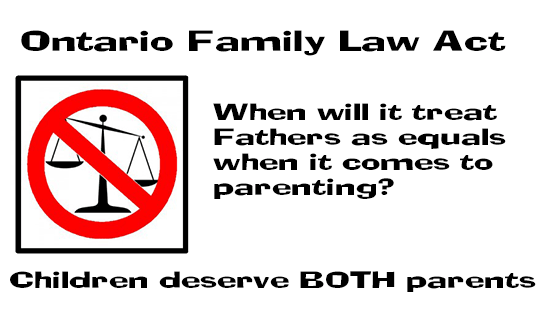