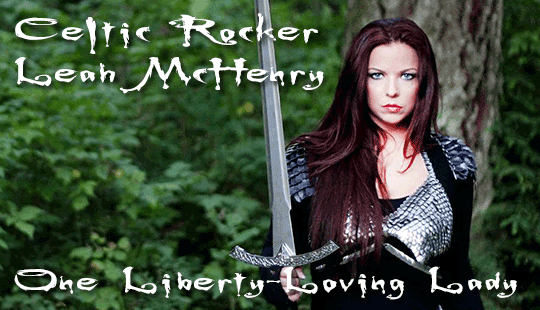 I’ll let you in on a secret.  I love celtic rock.  Always have.  For reasons I can’t explain this genre of music speaks to me, but when Celtic Rocker Leah McHenry sent me a friend request on Facebook I was both intrigued and puzzled.   Intrigued because I had never heard of her; puzzled because I didn’t know why a musician would seek “Facebook Friendship” with a freedom-defending, gun-loving redneck writer like me.

Before accepting her Facebook friend request I checked her personal page and quickly discovered this musician is every bit the freedom lover I am.  Leah read an article of mine that a mutual friend posted on Facebook, which prompted her to contact me.

The subject of that article was the RCMP abusing their privileges (not rights) and as I later learned, Leah “wholeheartedly agreed with the perspective of the article. When I realized it was coming from a fellow Canadian liberty-lover, I was interested in who this person was.”

I did a Google search of her name and found a number of interviews she’s given over the years.  That’s where I found out she called herself “The Homeschooling Metal Mama”.  A woman branding herself like that was definitely someone I wanted to know more about!

One question and answer from her interview on Metal Divas both made me laugh and gave some insight into who Leah McHenry is.

Metal Divas: What is a rule — whether it’s a law, societal standard, or moral code that exists that you think should be broken?
Leah: I think clichés are meant to be broken! For example, I educate my children at home, and am considered a “housewife”; however I don’t think I fit the traditional mold when people think of a housewife. I’m not a socially isolated “prairie muffin” who does nothing but bake bread and churn butter. Yes, I homeschool, and I like heavy metal, and guns, and chainmaille.

And the same goes for a metal singer… most people don’t think of a metal singer as a domestic goddess that enjoys raising children and teaching phonics. Whatever the cliché is, I will probably break it.

Leah McHenry calls BC’s beautiful Fraser Valley home but don’t mistake her rural home for anything but the House of Celtic Rock.   Leah’s passion is music, specifically symphonic celtic rock in the spirit of Enya and Loreena McKennitt. 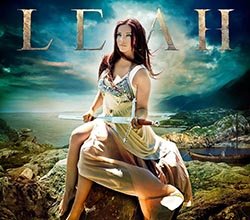 I’ve long been a fan of Loreena McKennitt’s music so when I read that Leah McHenry’s music was along that line I wanted to hear it for myself.  I loved almost everything I heard.  I love the piano and her mastery of it on songs like “Between Two Worlds” intrigued me.  The range of musical styles she’s mastered impressed me; everything from heavy metal to folk, celtic, pop, country and operatic styles show that she is both an accomplished musician and vocalist.

The songs she posted on YouTube (https://www.youtube.com/user/leahthemusic) cover a wide range of Celtic rock.  She covers some traditional songs, delves into some piano-based songs which I love, and the symphonic rock… well that’s just good clean fun!

You can also listen to Leah’s music on SoundCloud: https://soundcloud.com/leahmusic

After listening to Leah McHenry’s music and learning of her upcoming album I contacted her about writing this article.  She quickly agreed to an email interview since both our schedules are a little insane right now.

What I quickly learned is Leah Loves Liberty.  I appreciate that!

We have massive taxation and redistribution of wealth. We are a welfare state. We are forced to pay into a healthcare system that many of us do not want, do not get the benefit of and  which is failing.

On Those Evil Americans:

Some Canadians I talk to describe the US as a terrible place to live, as though all hell is breaking loose there, while Canada remains so innocent by comparison. Canada is exactly like the US in many respects (centralized banks, fiat currency, government monopoly of industries, etc.) only we are actually much further down the road in many respects.

The alarming difference is that in Canada, we are “quiet”. So much goes on here politically and economically that the average citizen has no idea about. Most are so oblivious, living with the notion of “free” money, “free” programs and their beloved health care, that they have no idea the trap that awaits us because of it.

We have a system of utter dependency. At least in the US, you have millions of people who are aware of what’s happening and are quite engaged and active in the fight for freedom. They are loud there. I appreciate that.

On Canadian Apathy and Complacency:

It is alarming, disturbing, and maddening at times to think of the things going on in our country that most Canadians have no clue about, or if they have some measure of awareness, they just don’t care. It’s easy to feel alone here, but I know to go about my business and keep on making music is one way I can do something, though it seems unrelated on the surface.

On Waking Up Canadians From Their Apathy:

I had a much smaller audience a few years ago, which has since grown immensely. Now that people follow what I do, I feel a greater sense of responsibility with what I produce. The messages in my songs need to matter.

Most of the time I post things through social media which I feel people need to know about, or are concerning. People who know me know I care a lot about the world in which we live and will leave to future generations. I care about the direction we’re headed in, and I see so few people caring that I often feel like jumping up and down on a mountain top, just to wake people up.

I think I’m still figuring that one out! I think the big challenge for many is how much spouses tend to change and grow at different paces. Perhaps when a couple met they felt they were compatible at the time.

As life goes on you have kids and mortgages, and all kinds of responsibilities and ventures, and you might come to a place where you feel you don’t “connect” anymore, or don’t seem compatible. I think our generation has been told it’s at this point when you should move on. I personally experienced this as a child with my own parents’ divorce.

I think if we talked more to people of our grandparents’ generation, they would say those seasons of life are normal, and something every marriage will need to work on, regardless of how compatible you are.

On Guns, Self-Defense and “Gun Control”:

I am among those who believe the right to defend your own life and the lives of your family is indisputable, and a right given by God. The state does not have any legitimate authority to take away this right. Any state that believes it does ultimately believes and acts as though it is God.

One only needs to spend a few minutes studying history to see the pattern of gun control leading to dictatorship and ultimately the mass slaughter of those people from whom they took the guns. This point needs to come up again and again in media, as a reminder to people who would otherwise not care, or those who think we’d all be “safer” without guns.

On Home-Schooling Her Children:

There are so many benefits to homeschooling; it’s hard to know where to start. If I had to mention just one, it would be that the government has no right to determine what my child learns. This is huge.

If people only understood the significance of taking back the responsibility of education.  This responsibility should never have been abdicated to government in the first place.

I have four kids, ages 2, 4, 6 and 8.  They are amazing examples of what children are capable of.

Children are able to learn at their own pace in a homeschool setting, and in many cases, far exceed the academic outcomes of public school students. Just the simple environment of being in the home allows students the freedom to think for themselves, instead of being forced into the assembly line of government indoctrination, which is actually a religious re-education.

The best thing I can do is to homeschool my own children and make sure they grow up to be critical thinkers. I encourage people I know to do the same. I’m a bottom-up believer. If we want to change what’s going on at the top, we have to change what’s going on at the bottom. Change beginning with individuals and families are where the biggest and most significant shifts must occur.

On Crowd-Funding Her Latest Album:

Crowdfunding is fan-based fundraising. If you have a pre-existing fan base (pretty much necessary for success), you fund your project, film, music album, or what-have-you through your friends, family, and fans.

My goal is to fund a new full-length metal album. Last Fall I put out a 5-song EP, but I’d really love to do at least 10-12 songs for this new one.

Recording an album is definitely not cheap. It’s the type of industry where you get what you pay for. Yes, there are cheap studios out there, but that’s exactly what the music will come out sounding like. Cheap.

The funds will go to paying musicians (I always hire out), studio time, mixing, mastering, artwork, and printing merchandise such as t-shirts, posters, and the CD’s themselves. 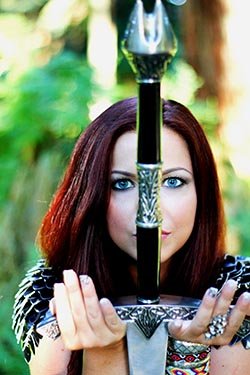 Leah is not signed to a record label which is both a blessing and a curse.

It’s a blessing because she maintains total creative control over her music.  That’s important for any artist, musician or otherwise.

The curse is it costs a lot of money to record a good album.  With the backing of a record label you can afford to produce a quality album without digging into your own pockets.  Without that financial backing you must resort to other means to get your music made.

Leah McHenry is not shy.  She is also not afraid of taking risks. Using the crowd-funding platform IndieGogo.com Leah made a brave, all-or-nothing gamble on her next album.   Either she raises the entire $25,000 she needs through IndieGogo.com or she gets nothing.  If she comes up even one dollar short she won’t see a single penny of the money people from around the world pledged to her.

Leah McHenry is an independent musician.  She is a gifted musician and a talented singer.  She is precisely the type of person I believe in supporting so she can achieve her goals.

In Leah’s case her current goal is to raise $25,000 to finance the production of her next album. If you listen to her music, as I did, I am sure you will agree she is worthy of your support.

What I appreciate about Leah’s fundraising efforts is she believes, as I do, that when you give to a cause you get something in return.

Leah has some amazingly creative rewards for anyone who supports her IndieGogo.com fundraiser.

Check out Leah’s music at these sites, then financially support Leah’s new full-length album, even if you give only $10.