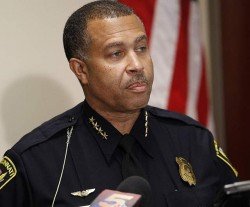 I’ve written about Detroit Police Chief James Craig before. I could probably write about him weekly and the message would still be missed by those too brain-dead to comprehend Craig’s  support of civilian self-defense.

James Craig believes every one of us has the right to defend ourselves against aggression, even if that means not dialing 9-1-1 until the problem is already solved.

By “problem” I mean the home invader, the attempted rapist, the violent criminal intent on robbing you or worse… should one of we mere citizens shoot a bad guy James Craig will not lose any sleep over it and he doesn’t want the good citizens of Detroit to do so either.

“Coming from California (Craig was on the Los Angeles police force for 28 years), where it takes an act of Congress to get a concealed weapon permit, I got to Maine, where they give out lots of CCWs (carrying concealed weapon permits), and I had a stack of CCW permits I was denying; that was my orientation. I changed my orientation real quick. Maine is one of the safest places in America. Clearly, suspects knew that good Americans were armed.”

Instead of doing what Canada’s RCMP is today, namely harassing law-abiding gun owners and turning them into criminals and fabricating stories about mass shootings with AK47s, Detroit Police Chief James Craig is doing what police ought to do.

He’s going after actual criminals. He feels no need to manufacture them out of his law-abiding citizenry, and for that he can be commended.

Going after the bad guys does come at a cost, of course, which is why the RCMP doesn’t seem very interested in following James Craig’s lead.

Bad guys do stupid things when police get in the way of their “earning” power, and Detroit Police Chief James Craig’s case is no exception.  He’s knocked such a hole in Detroit’s drug crime that the dealers want him dead.  Literally.

The FBI and local police are investigating a threat to kill Police Chief James Craig, the chief said Saturday. The threat, made over the internet by a man believed to be a drug dealer, was uncovered Friday, Craig said.

“We got information that a dope dealer basically said ‘We need to take the chief out,’” Craig said. “We investigated it, and it was deemed a credible threat. This is the kind of thing that happens in third-world countries.”

Craig believes the man who made the threat is upset because police are costing him money by ramping up the number of drug-house raids they conduct.

“We’re raiding, on average, 35 dope houses a week, and we’ve done five large-scale sweeps, and it’s putting a serious crimp in the dope dealers’ money,” Craig said. “What I take from this is, what we’re doing is working. This guy actually did me a favor, because he let me know we’re making a difference by going after these dope dealers.”

“I want to be there when we get this guy. I want to look him in the eye. You don’t threaten any police officer, let alone the police chief.”

Here in Canada, however, we’re content with turning over 13,000 law-abiding citizens into criminals overnight, all at the whim of some RCMP bureaucrats.

As I’ve said before and will no doubt say again, law-abiding gun owners don’t shoot cops.  Real criminals will.