The problem with some folks is they can’t accept the fact an opinion exists of which they don’t approve. The problem with politicians is they feel compelled to pander to the people who cannot accept another’s point of view.

Combine the two (incessant whiners and politicians) and you get nightmares like the Canadian Human Rights Act and Section 318 of the Criminal Code, both of which create special status for “special” people, leaving the rest of us mere citizens out in the cold.

Not only are we left out in the cold, we now have the full weight of government to contend with any time we say something one of the protected class of whiners doesn’t like.

Shockingly, one isn’t required to be a member of a protected class in order to file a complaint on their behalf.  ‘I’m outraged for you’ appears to be the operational basis here, and a very profitable one for some.

Try saying anything outside of the mainstream politically-correct view about any of the following folks and you will quickly discover the error of believing you actually have a Right to Freedom of Speech:

“any section of the public distinguished by colour, race, religion, ethnic origin or sexual orientation.”

As in George Orwell’s Animal Farm, some pigs are truly more equal than others.

White heterosexual Christian males need not apply, however. You are NOT one of the “protected classes” of people despite having an actual religion, sexuality and race. Put another way, you’re not quite as equal as others.

Am I saying every member of these protected groups is a whiner?  Of course not.  I blame gutless politicians for pandering to special interest groups more than I do those lobbying on their behalf.

To live is to offend someone, somewhere along the way. Do we really need a group of bureaucratic thugs to beat us into submission simply because our view of the world is different than theirs?

Here in Canada the answer is a resounding YES!

Ask Marc Lemire, Connie Fournier or Arthur Topham. Each of these individuals suffered the crushing weight of bureaucratic excess, and often for sentiments they never even wrote.

Marc Lemire faces a lifetime free speech ban for an article posted on his website.  He didn’t write the article.  He didn’t even post the article himself, yet the screaming banshees at the Canadian Human Rights Tribunal consider him more of a threat to the “Canadian way of life” than… well pretty much any violent criminal.

To date the Canadian people have wasted over a quarter million dollars prosecuting Marc Lemire… and for what?  An article he didn’t even write that was read by perhaps 10 people worldwide?

Connie Fourier finally shuttered FreeDominion.ca after being found guilty of defamation of serial human rights complainant Richard Warman. The final straw for Ms. Fournier was the condition she be held liable for any negative comments made by anyone, at any time in the future, about Richard Warman.

That ruling’s phrasing would even allow Richard Warman, for example, to log onto FreeDominion.ca and post something negative about himself and still trigger the full weight of the law on Ms. Fournier.  It’s utterly absurd for Connie Fournier to he beld accountable for the comments of another, yet that’s now the law of the land here in Canada.

Nobody will tell Topham what he wrote that was so offensive.  Instead they demand he defend everything he ever wrote from six months before his arrest until… well.. whenever he might finally get his day in court.  That’s right.  Every word Mr. Topham writes until his trial can and will be used by Crown prosecutors to show what a heinous threat he is to both the Canadian Way of Life and The World as We Know It.

Yeah, there’s justice for you!

While I would hope our Canadian skins are thick enough to tolerate offensiveness in others… apparently we can only tolerate our own offensiveness.  That our attitudes may actually offend others is completely missed in the rush to fend off some perceived slight.

Like Stephen Fry so bluntly said, if you’re offended by what I say, “…so fucking what?”

Get over yourself already.

Dismantle every so-called “human rights” tribunal and commission across Canada. If they were ever needed (I doubt it) their “best before” date expired long ago and are now simply vehicles for punishing those with whom we disagree.

Abusing our fellow citizen is not a “Canadian value” simply because we disagree with what he or she says.

Or at least it shouldn’t be. 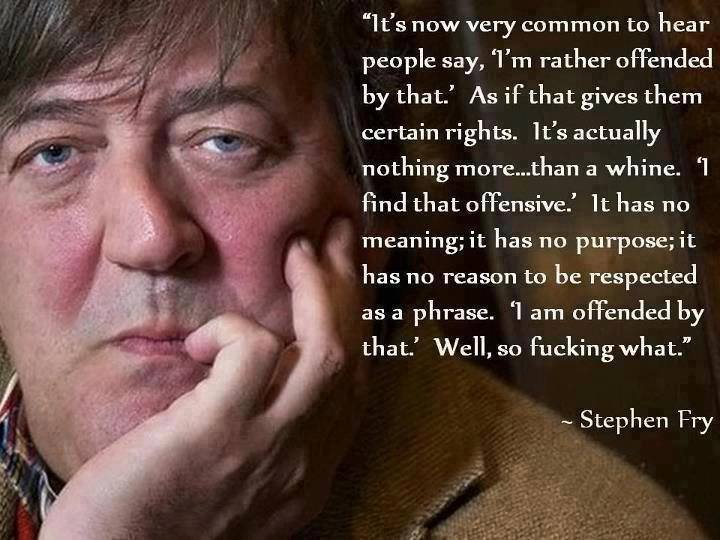