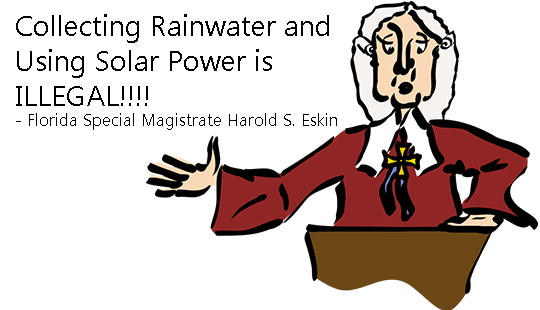 We’re told endlessly that we must be responsible for the energy we use; that we must be energy-self-sufficient; that the world as we know it will literally come to an end of we don’t buy into the eco-frenzy.

I have no issue with being energy-self-sufficient. In fact I completely agree with the philosophy.

Twenty-five years ago the power company wanted an exorbitant amount of my money in return for sending me an electricity bill each month. I told them to pound sand. I installed solar panels almost immediately and have run my home on them ever since.

From Living Off The Grid:

Speronis, a former real estate agent, decided to adopt an off the grid lifestyle in the home she owns after her husband died after a long illness. She cited her faith in God and desire to be self-sufficient.

“It was an interest in empowering myself, like we did when we got off the health care system,” she said. “I wanted to look at every other part of my lifestyle and say, do I need this? Is this of value to me? If it went away tomorrow, what would I do? The more I got into it, the more exciting, the more of an adventure it became.”

Then came the bureaucrats and with them their deeply ingrained fervor for “following the rules” and their highly illogical sense of injustice.

Last November a bylaw code enforcement officer showed up at the Speronis home and promptly tried evicting Robin Speronis from her own home.

The reason? Robin refused to use public utilities.

At the root of the case is an outdated and idiotic requirement that every home must be connected to the city water system. This dates back to the time when the city deemed using well water a sin and forced everyone to use the city water system.
The Cape Coral city bureaucrats now claim dominion over the skies and the water that falls freely from them. Collecting rain water is now considered a violation of this outdated (did I mention idiotic) city ordnance too.

Her case ended up in court, where Special Magistrate Harold S. Eskin made an utterly absurd ruling.

While declaring the bylaw regulations of Cape Coral redundant and unreasonable, Eskin ruled simultaneously that Robin Speronis violated both local city codes and the International Property Maintenance Code, which unilaterally declares any home without grid-sourced electricity and running water is “unsafe and unsanitary“.

In a word… Hogwash.

Speronis’s case should be a wakeup call for anyone living off the grid. The International Property Maintenance Code and similar regulations are on the books in many parts of the United States and Canada.

Speronis refuses to bow to the city’s demands, though, even while they force liens on her property and continue to issue more fines associated with her ‘violations.’ She is able to appeal the judge’s decision, which would allow her to carry on with her sustainable lifestyle.

She has said, “We have a long, long road to go. I’m sure justice will prevail.”

Living in harmony with nature is now a crime?

I can’t wait for the eco-freaks to catch onto this story.

They’ll surely shred Special Magistrate Harold S. Eskin with his own stupidity, and rightfully so.