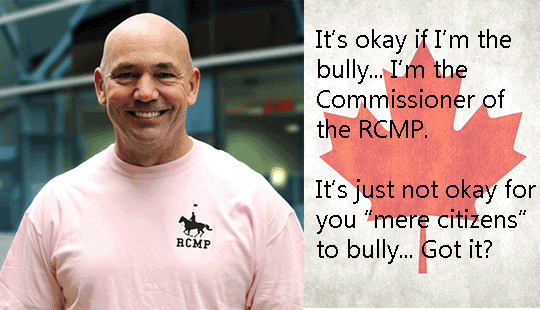 While the RCMP promoted Pink Shirt Day as a way of stopping bullying in schools, the horsemen took to bullying some of Canada’s best and most law-abiding citizens: gun owners.

In true hypocritical fashion, the Boys with the Yellow Stripes did precisely as they pleased and with zero regard for the people they bullied into criminals.

“February 26th is Pink Shirt Day, and RCMP Commissioner Bob Paulson is proud to be a part of this initiative. Bullying and Cyberbullying isn’t just hurtful; in some cases, it’s illegal. Don’t take part. Take a stand.”

Bullying Hurts.  I know. I’m a gun owner… Just like the 13,000 gun owners you bullied into criminals this week.

The comments section overflows with vitriol over the creation of over 13,000 brand new criminals by unaccountable RCMP bureaucrats, a situation that has taken RCMP–Gun Owner relations to an all-time low.  That says a lot given how poor those relations were even before this latest anti-gun-owner stunt!

You’ve lost the trust of a great number of people, people the law is supposed to be protecting. Turning its own citizens into criminals overnight. We are the ones who should be trusted, not you.

This man is responsible for constantly bullying law abiding firearms owners. I cannot support the RCMP or their pink shirts as long is this man is allowed to remain in his position. Please resign and do everyone a favor.

he should stick to bullying and leave peoples guns alone….he is the bully !!

Perhaps you should ware you handguns at the next meet with the prime minister like you do with your daughters boyfriends. See what intimidation gets you from him. Don’t bully gun owners.

Delete all the posts you want but angry gun owners aren’t going to quit posting until you go after the real criminals and quit unfairly targeting us. You some anti-gun Liberal from Quebec or something? Oh and resign. Did I say resign?

Is always the need for non-white toilet paper when in the field.

Referencing a year-old video interview where Paulson is positively gleeful while he recounts stories of bullying his daughter’s suitors by answering the door wearing his duty firearm in a variety of holsters, Ryan Lobson writes:

Isn’t intimidating your daughter’s boyfriends with your “device” bullying? Get your head on straight Bob.

No, it’s not.  It’s just another day in the RCMP… where hypocrisy knows no bounds.