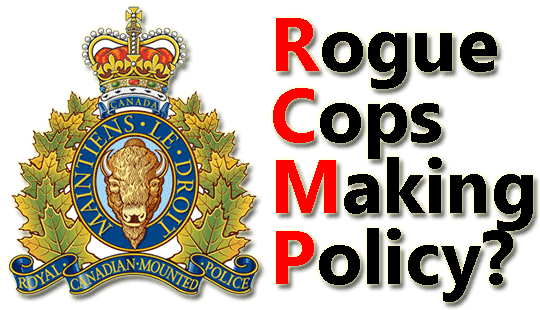 Gun owners across the country are understandably upset.  One day they were law-abiding gun owners complying with every law required to own these firearms, the next day they are criminals facing serious prison time.

“It is a dark day when police, not the people’s elected representatives, can suddenly transform thousands of ordinary, law-abiding Canadians into criminals with the stroke of a bureaucratic pen,” writes Lorne Gunter.

Presumably the 5-year limitation on this amnesty is because Minister Blaney will resolve this abuse of RCMP bureaucratic power long before that deadline.  How he will resolve it remains to be seen, but preventing the RCMP from arresting and criminally charging these gun owners is a good first step.

“That’s a good first step, but no more than that. The RCMP’s reclassification of these firearms, suddenly turning normal Canadians into outlaws for owning property the RCMP had already approved, was outrageous. No explanation was offered as to why these firearms had suddenly become more dangerous. No incidents of violence were cited, no new information brought forward. In effect, the RCMP changed its mind, and ordered citizens to turn over equipment they had invested thousands of dollars into or else face criminal charges. This is a grotesque abuse of power, and one that the police should not have. In a free society, the police enforce the laws, and even interpret them with trained judgment, but they do not make them up as they go.”

While many gun owners on internet forums are absolutely furious Public Safety Minister Steven Blaney didn’t do more, I would suggest they are overly impatient, if not naïve.

My first reaction was outrage at the initial announcement too, but after taking a breath and thinking about what Minister Blaney said publicly I’m betting on a longer game than simply giving amnesty to these newly manufactured “criminals”.

Public Safety Minister Steven Blaney made it crystal clear the RCMP’s actions are unacceptable.  He has no interest in allowing RCMP bureaucrats to create policy.

“I want to assure you all options are on the table to fix this situation. I will also be taking steps to make sure this never happens again.”

Ensuring the RCMP can never again manufacture 13,000 criminals out of thin air will take more than a weekend to work out.

That the amnesty came immediately is a positive sign of Minister Blaney’s intentions.  There is more to come, of that I am confident.

I am every bit as impatient as any Canadian gun owner, but I am confident Minister Blaney will keep his word and ensure “this never happens again.”

There are a lot of options available to the Minister of Public Safety and only a fool would believe Blaney is not cognizant the pro-gun vote depends on his actions on this issue.

He could strip the RCMP of its duties as they relate to the Canadian Firearms Safety Program. He could issue an Order In Council to resolve many outstanding issues, including this one.

What ultimately must be addressed, however, is the core issue of the RCMP’s systemic hatred of Canada’s law-abiding gun owners.

“There is a movement within the RCMP and they don’t like to see guns in the hands of anybody but themselves.”

Law-abiding gun owners used to be the RCMP’s best friends.  Not any longer, although it’s not we mere citizens who have changed. We haven’t.  We’re every bit as law-abiding as we’ve always been but that makes no difference to the RCMP ‘s bureaucratic thugs.

Is it simply that they feel pressure to “do something” about so-called “gun crime”?  If so, they’re attacks on we law-abiding gun owners are thoroughly and completely misguided.

They are, however, completely in line with the RCMP’s core mantra:

Better to let a thousand “mere citizens” die than a single RCMP member.

Better to swarm and kill frustrated traveler Robert Dziekanski in 35 seconds than calm him down and help him on his way to his new home.

Better to shoot Ian Bush in the back of the head and claim self defense than tell the truth.

Better to send SWAT Teams after expired firearms license holders in Alberta than simply phone them and ask where their license renewal papers are.

Better to manufacture over 13,000 criminals out of law-abiding citizens with a stroke of your bureaucratic pen than to go after violent criminal gang members.

Those guys will shoot back.

Law-abiding firearm owners won’t… and the RCMP knows it.