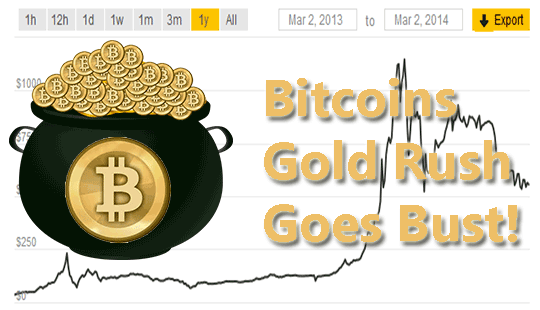 I’ve watched the infatuation with Bitcoins for some time now and was amazed at their meteoric rise in value. What I’ve been less surprised about is its equally meteoric fall.

Dr. Gary North has long held that Bitcoins are not money. He has many reasons for that belief and every one of them, I believe, is correct.

Bitcoins are not money. They are simply one more penny stock that’s gone through the roof and then crashed spectacularly once their true value becomes known.

A penny stock rises and falls based on hype. Bitcoins value rose entirely on hype and the mistaken belief that this programmer-fabricated stock would replace actual currency.

Mt. Gox was the most public and well-known brand that represented Bitcoin’s exchange market. The company’s shutdown is rumored to be caused by a “hack” or “security breach” that resulted in a loss up to 744,000 BTC or $409,200,000. (Based on the approximate value just hours ago from Coindesk.com) This is truly an unfortunate event that has caused the international community to shake its trust in Bitcoin as evidenced by the massive price drop. This is par for the course, when a pillar in the community falls in such a funeral pyre. The best parallel would be the Bear Stearns’ failure during the 2008 global financial crisis. Hopefully, Bitcoin won’t follow in the financial system’s footsteps post-Bear Stearns.

Like all stocks, Microsoft stock isn’t currency, it’s an investment. Similarly Bitcoins are not currency. They are an investment, and at this point they appear to be a very bad investment, having lost over half their over-hyped value in just 3 months.

That is a bad investment by any standard.

Now if you purchased Bitcoins just 2 months before their all-time high you still would have a good investment, IF you can liquidate that investment. On October 2, 2013 Bitcoins were valued at just $99.81.

But they are still an investment, not currency, and very few people bought in back in October 2013. Why? The hype machine was not yet in full swing.

With the crash and burn of the world’s largest Bitcoins exchange, Mt. Gox, the demise of the entire Bitcoins realm cannot be far behind, and there is a good reason for that. Even the most blindly faithful Bitcoins followers must now comprehend basic economic reality: If you cannot prove ownership you cannot recover any of your actual currency from Mt. Gox even if you could find the owner and his millions of actual dollars poured into that exchange by tech-hyped investors.

Nobody says it any better than Gary North himself:

Reuters reports: “Mt. Gox had $174 million in liabilities against $32.75 million in assets. It was not possible to verify the document or the exchange’s financial situation.”

I say: “A fool and his digital money are soon parted.”

How will the investors prove in a Japanese bankruptcy court that they deserve a part of the supposed $32.75 million? After all, the transactions are all secret.

They wanted secrecy, and they got it, good and hard!

I have said it from the beginning. Bitcoins are not money. They are a crap-shoot. Those who invested in Mt. Gox have lost all of their money. Real money. Dollars.

The programmers (with little money then and less now) said Bitcoins will replace dollars. They said Bitcoins are safe. They said, “this is the wave of the future.” Yes, it was. A tsunami. Think of Mt. Gox as Fukushima.

You go to your bank. You take digital money out. Real digital money. Dollars. This leaves a record. You buy Bitcoins on an exchange. You lose control of your money. It’s not money any more. It’s Bitcoin digits. These digits are not money. They are promises to pay issued by some outfit you know nothing about.

Suing Mt. Gox will do you no good, a point Cameron Keng makes very clearly on Forbes.com.

Can we sue or file a claim against Mt. Gox? Suing Mt. Gox would require an international lawsuit filed under Japanese law, where the company is headquartered and registered by the Tokyo Chamber of Commerce. Realistically, it won’t be worth our time or money to go after the company. It’s unlikely that there will be enough assets held within the company to pay off any substantial or meaningful portion of the lost bitcoins.

If you invested in Bitcoins you had best dump this infatuation while it still holds some value and before other exchanges follow Mt. Gox’s footsteps.