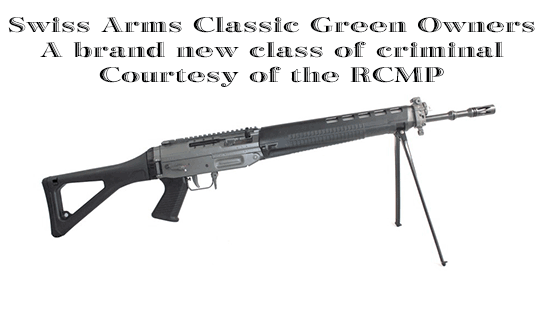 Well, our national police force has made another unilateral decision regarding the legal status of the Swiss Arms rifle.

Generally referred to as a “green” or “black special”, this rifle has been in the non-restricted category for well over a decade and has now been relegated to prohibited status.

The rationale behind this reclassification and confiscation order is that, according to the RCMP brass, the rifles are “easily?” converted to fully automatic by an RCMP firearms technician.

Of course, to make such a conversion is illegal as hell.

The rifles are expensive, running in the $3800.00 range and to this date have been used to commit zero criminal acts.

Owners will not be compensated after they are ordered to surrender their property to the police.

Steve Blaney, our latest minister of “public safety” has pretended to be surprised and indicates that the RCMP failed to inform him of the pending decision, announced at 2200 hrs last night.

Many of you are going to just sit on the couch and be thankful that you haven’t invested in one of these rifles, rub a shaking hand across your furrowed brow and get back to the hockey game.

If firearms owners do that and fail to vigorously protest this latest round of chest beating by the RCMP, then I can assure you that all, self loading rifles of military design will be classified as prohibited and confiscated more quickly than you could imagine.

Our government appears to have abdicated and turned over the legislature to the RCMP.

Our elected officials, ministers, senate etc. have put the advancement of their political careers above their duty of responsible leadership.

Our country is run by a pack of long entrenched bureaucrats and they have made a mockery of our so called Charter of Rights and Freedoms.

They have made a mockery of justice of liberty and of freedom.

On 6 January 1941 Franklin D. Roosevelt delivered his “Four Freedoms” speech and they were:

These freedoms were not watered down by any “notwithstanding clause”, they were not limited to any special group or organization. They were not exclusive to any political party nor were his words tainted by the forked tongues of the press.

The RCMP are going to take your guns unless you stand up for what is right and just.

Or do nothing until a copy of the law of “eminent domain” slaps you in the face.