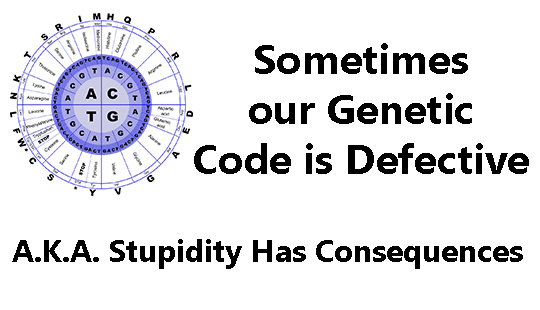 Human beings are amazing creatures.  We’re creative, astounding beings most of the time.  However, there are times when the Gene Pool needs cleaning and in those moments our genetic code’s self-correcting mechanism is extremely powerful.

Take, for example, the case of an unnamed Michigan man who decided to teach his girlfriend all about firearm safety.  He told her all three handguns were clear and safe and then proceeded to prove this to her by pointing the gun at his head and pulling the trigger.

Unfortunately the now deceased man hadn’t bothered to actually check for himself that all three firearms were in fact cleared.

After successfully pulling the trigger on two firearms and hearing the expected “click” of a hammer falling on an empty chamber, the third trigger pull resulted in his brains splattering all over the wall behind him.

The third handgun was loaded.

From the article on wxyz.com:

The woman tells police her boyfriend had been drinking most of the day before showing her how to use his three handguns and demonstrating they were safe when empty.

Police say he placed the first two guns to his head and pulled the triggers once each, but the third gun fired. He was pronounced dead at the scene.