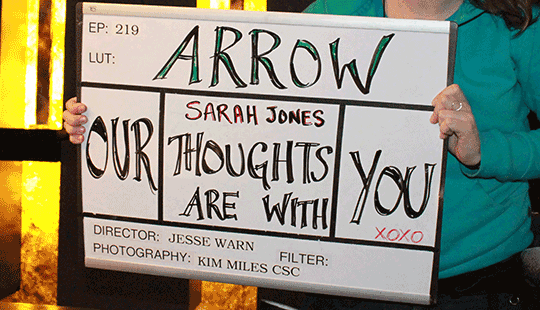 Sarah Elizabeth Jones, 27, was a native of West Columbia, South Carolina. She was born on September 22, 1986. She lived in Atlanta, GA where she worked as a Camera Assistant on many projects.

Sarah lost her earthly life on February 20, 2014 in Savannah, GA, doing the job she loved.

Film crews across North America are banding together to express their condolences at the loss of one of our own, including the crew of the hit show “Arrow”.  The Arrow Camera Department’s Amie Gibbins spearheaded the crew photo submitted to Slates for Sarah on behalf of the cast and crew of the show. 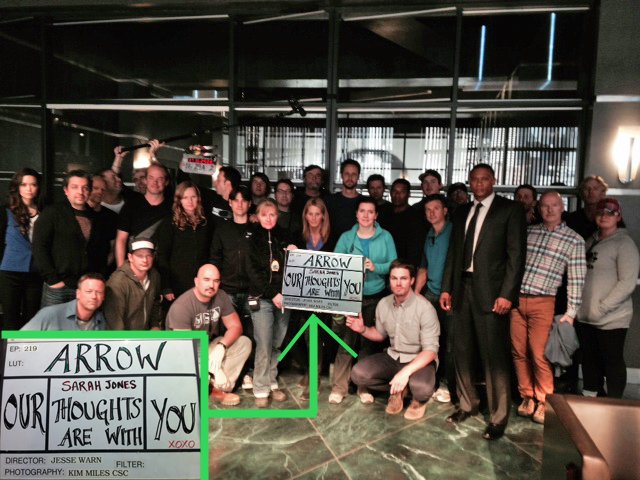 For more information on the Slates for Sarah project please visit https://www.facebook.com/slatesforsarah

A graduate of Brookland-Cayce High School and the College of Charleston, Sarah finished her formal education with a major in Media Communications and a minor in Film Studies.

Sarah began her film career while interning on the set of Army Wives, a popular television show. With her spunk and determination, Sarah continued to climb the ranks of the film industry, quickly finding a passion in the art of Cinematography. She was a loyal and respected member of the International Cinematographers Guild (IATSE Local 600).

From the heights of the mountains she hiked, to the depths of the oceans she dove (and never without a camera to record her experiences), the gift of her presence was felt far and wide. To have HEARD of Sarah was a privilege, to have KNOWN Sarah was a blessing.

It was to feel an energy that was infectious and kind. Although her physical being is no longer beside us, her smile and her love of life will forever transcend in all the lives of those she touched. Her friends are too many to count.

In lieu of flowers, the family is requesting that donations be made to: BC Education Foundation Sarah Jones Scholarship Fund c/o Brookland-Cayce High School 1300 State Street, Cayce, SC 29033