The idea of an appointed government overseer for every person born sounds ludicrous, doesn’t it?  Surely such a bloated bureaucracy exists only in the imagination of Nanny State promoters, right?

Who could believe such a plan was hatched in Scotland.

Not only was it hatched in Scotland, this Big Brother’s Wet Dream, also known as the Children and Young People (Scotland) Bill, passed into law unanimously, 105 – 0, on February 19, 2014.

No, I’m not making this up.

Not a single Scottish politician had the backbone to vote against the massive expansion of the Nanny State’s intrusion into the family lives of ordinary Scots.

“This is a dreadful extension of the state’s tentacles into family life,” said Colin Hart, director of the Christian Institute.

“It is clear this bill breaches European rules through its attack on the family. … Ordinary Scots should be very afraid.”

The vote shocked everyone who believes in family so it’s no surprise those opposed to Nanny State snoops taking the place of actual parents are threatening legal action.  They want the bill rescinded. 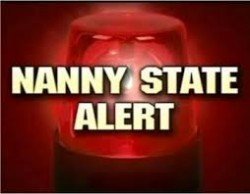 Under this bill the National Health Service would appoint a government worker for every child up to the age of five.  That Nanny State bureaucrat would have the power to share information with a wide range of public authorities and to intervene in the child’s life without parental consent.

This would affect every child 5 years old or younger effective immediately, and every single child born in Scotland from this point forward.

The very last thing we need is government bureaucrats taking over the role of parent.

Here in Canada we’ve seen the result of this asinine behaviour in the case of Jesse Sansone, a young father who was arrested, strip-searched and threatened with charges of illegal possession of a firearm all because his 4-year-old daughter drew a crude picture of her daddy holding a gun, saying he used it to kill “monsters”.

Jesse Sansone does not own firearms, legally or otherwise.  Police refused to take his word for it of course, but the unethical search of his home proved him to be a man of his word.

Gregg Bereznick, Superintendent of Education at Waterloo Region District School Board, went on national television and called himself and his fellow school employees “co-parents”, explaining “we do work hand in hand with these families because we co-parent …”.

On being asked to explain the term “co-parent,” Bereznick said,

“by co-parent I’m talking about teachers and parents working together to support children as they grow up. And so those relationships are important to us, and we value them. But we also understand that within that context, it may be required for us to bring forward a disclosure because it is our legal requirement to do so.”

This asinine attitude is happening today in a nation that does NOT mandate government overseers for every child born.

I truly fear for my Scottish friends if this atrocious law is not repealed.

I can easily imagine a dozen scenarios where this new bureaucratic power can be abused.  So can you.

Perhaps you have a hobby that your government monitor disapproves of. Perhaps you are religious, but are the wrong religion.

That makes absolutely no sense at all.

But then the Nanny State never makes sense.  It simply demands blind obedience for obedience’s sake.

You are, if nothing else, a warning bell for the rest of us to remain vigilant against the encroachment of the Nanny State into our lives.