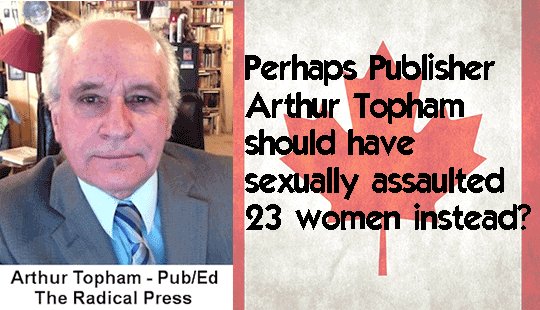 That may seem a strange title for an article about our legal system, but after reading about Campbell Ernest Crichton, the former Duncan, BC, physiotherapist who faces charges he sexually assaulted at least 23 of his former patients, it seems to be the correct title.

A hearing has been ordered in the case of a former physiotherapist who successfully argued he was too poor to pay for a lawyer to defend himself against charges he sexually assaulted 23 female patients.

Last year Campbell Ernest Crichton of Duncan, B.C., had his charges temporarily set aside after a judge found he was indigent and needed a government-funded lawyer for the complex criminal trial.

Anyone following my writings on Freedom of Speech will be well familiar with the case of Arthur Topham, the Quesnel, BC, publisher of RadicalPress.com, and alternative news website.

Mr. Topham currently faces criminal charges under Section 319(2) of the Criminal Code of Canada for “inciting hatred” against an identifiable group.

What, you ask, is the connection between Arthur Topham’s Freedom of Speech case and an [alleged] degenerate serial sex offender?

Quite simply, neither man can afford legal counsel for their criminal trials.

Arthur Topham is facing criminal charges for exercising his Right to Freedom of Speech.  There is no “victim” here other than a few people whose actions lead me to believe they self-identify as victims.  Topham sexually assaulted nobody.  He physically harmed nobody.  He never forced a single person on Planet Earth to read what he wrote.

Despite those facts Arthur Topham’s right to a fair trial with adequate legal counsel seems unimportant to the very same judiciary that ruled an [alleged] serial sex offender ought to have a government-funded lawyer.

Arthur Topham is not a wealthy man.  He’s a modest man living on modest means in his rural home outside of Quesnel, BC.

By these standards it is far more important that a sexual deviant’s rights be safeguarded than a man who dared write a few words someone found objectionable.

That is a very dangerous precedent to set.

Sending a man to prison for the words he writes out to scare the crap out of every single writer in Canada.  Sure, today it’s Topham’s views that are “politically incorrect” and therefore fair game for our legal system, but what about tomorrow?  Whose views will be deemed “incorrect” then?  Who will stand up for you?

Campbell Ernest Crichton is charged with sexually abusing 23 human beings.  That is real, substantial physical and emotional trauma all for one sick man’s own sexual gratification.

There are real human victims.

Arthur Topham wrote an article someone didn’t like.  For that the BC Hate Crimes Unit of the RCMP and the BC Attorney General want to send Mr. Topham to prison, while refusing him any chance of a true legal defense.

Shouldn’t we be far more concerned about sexual predators?

After all, ideas are far more dangerous than sexual predators, right?