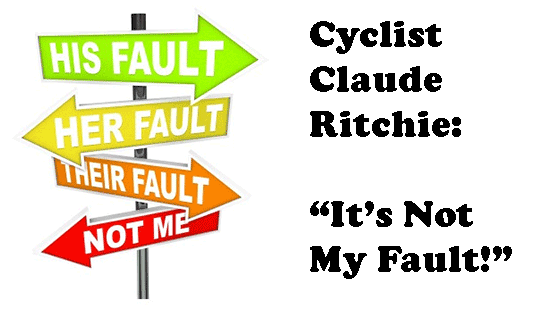 When I read the headline “Cyclist ordered to pay man $226,000” I thought the award was outrageous.  Perhaps even ridiculous.  Then I read the article and the actual court ruling in the case of Jang v. Ritchie (Jang v. Ritchie 2013 BCSC 2459) and came to a very different conclusion.

The award is far too low.

Claude Ritchie learned a very costly lesson.  He is now on the hook for $226,102 as a result of the civil lawsuit filed against him by the victim of his negligence, Myong Su (John) Jang.

He is accountable for the result of his actions, even when they are an “accident”.

On May 25, 2007, Claude Ritchie cycled along a trail in Burnaby’s Central Park.  He lost control of his bicycle and crashed into John Jang, a sushi chef at many well-known Vancouver restaurants for the past 25 years.

When Mr. Jang crashed to the ground his wrist and hand were shattered.  It took surgeons over two and a half hours to reconstruct his broken bones.

As a result of his injuries Mr. Jang lost his career, is still in pain, and his hand is permanently fixed in a claw-like position.  As a result of the “negligent” actions of Claude Ritchie Mr. Jang’s life is changed dramatically and permanently for the worse.

For his part Claude Ritchie appears to shirk all responsibility for his actions.  He never attended the trial and stopped communicating with his own lawyer who then removed himself from the case.

It appears Mr. Ritchie has chosen to avoid this litigation. He did not attend examination for discovery and, as noted, did not attend this trial to contest either liability or the amount of damages.

From his own actions, or more specifically his lack of action at all, Claude Ritchie appears to believe he should not be held accountable.

That is wrong.  Completely wrong.

We live in a nation that promotes this notion, much to our detriment.  That needs to change.

For his part Mr. Jang is not a mean or vindictive man. He simply wants Claude Ritchie to do the right thing; to take responsibility for his actions.

Mr. Jang spent his entire life doing the right thing, being responsible for himself and his family, including bringing his parents to Canada from Korea and supporting them as well as himself, his wife and their two children.

[7]             I turn first to non-pecuniary damages. Mr. Jang came to Canada from Korea 30 years ago. He did not speak English so opportunities were limited. A friend taught him how to make sushi. Mr. Jang found a job working as a helper in a sushi restaurant. Within two years, he had worked his way up to sushi chef, a position he held for the next 25 years in fairly well-known sushi restaurants in the Lower Mainland.

[8]             Mr. Jang is not a complicated man. His life has centered on his work and his family. He has a strong sense of responsibility to the members of his family. Within a few years of arriving in Canada, he brought his parents over from Korea. He worked hard throughout his life to support them, his wife, Teresa, and their two children, Christopher and Angela. Mr. Jang took pride in his ability to provide for his family and to care for their home. He had limited recreational and social activities outside of work and family, walks in the park, swimming at the community centre, and weight training. His life has been profoundly affected by this injury.

In short, he is a man who believes in personal responsibility.  He is a man with a strong work ethic.

He is the kind of man we need more of in Canada.

Claude Ritchie, based on what Justice Fenlon said in her ruling, is the kind of man Canada needs none of.

We need men who will stand up, act like men and take responsibility for their actions, good and bad, no matter the consequence.

Claude Ritchie’s negligence (as determined by Justice Fenlon, not me) cost a good man his career and livelihood, yet Claude Ritchie isn’t interested in taking responsibility for that negligence, no matter how “accidental” it may be.

Accidents happen.  That does NOT mean we are not responsible for the result of those accidents.  Especially when they cost another everything, as in Mr. Jang’s case.

I pray that Claude Ritchie will be found and made to pay every penny of this judgment against him.  It’s a pittance compared to the loss suffered by the victim in this case, Myong Su (John) Jang.

If you know Claude Ritchie I would implore you to urge him to do the right thing, to take responsibility for his actions and, most of all, act as a man ought to act: with integrity and honour.

The cost of personal responsibility is very high.

It’s the only way human beings can live together properly.