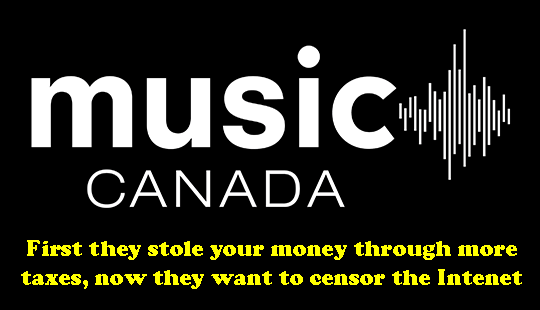 If I were a Canadian musician I would like to think I’d be ashamed to be associated with Music Canada or it’s chief whiner, Graham Henderson.  This self-righteous yahoo believes the only way to save Canadian musicians is to censor the internet.

As Michael Geist wrote so eloquently this week:

Graham Henderson, the head of the Music Canada (formerly the Canadian Recording Industry Association) wrote a blog post late last year lamenting musicians’ earnings, a situation he blames on the Internet allowing a few to “amass staggering, unprecedented wealth” while musicians toil for tiny incomes. Leaving aside the facts that the Canadian music industry experienced increased digital sales last year (while sales declined in the U.S.) and that the Ontario government is handing out tens of millions of tax dollars to the industry, Henderson now says the government needs to step in and regulate the Internet. According to Music Canada, government support must be complimented by:

judicious and reasonable regulation of the internet. The actions taken by courts in other jurisdictions have very reasonably required ISPs to block websites that are almost entirely dedicated to the theft of intellectual property.

In fact, Internet regulation and blocking websites are not the only music industry target. Last week, Music Canada appeared before the Ontario Standing Committee on Finance and Economic Affairs, where it cited Google as a problem:

the federal government has done a lot to help us in our battle against illegal sources, but they could certainly do more. One of the biggest problems we have is that consumers cannot find legal services on Google. Type in: “Carly Rae Jepsen”; pick your song; press “search.” You would have to look to page 7 of the results to find iTunes. Before you get there, you have six and a half pages littered with illegal sites which are constantly being taken down and constantly being put back. With government support, maybe we can urge intermediaries to actually do something to help consumers find legitimate sources, because I think they’d like to.

I tried replicating Henderson’s claims regarding Google and arrived at much different results. Searching for Carly Rae Jepsen and the song Call Me Maybe, the very first result was a music video posted by Jepsen’s label which receives royalties and has a link to the iTunes version for purchase. Other top results include Jepsen’s own website (with links to iTunes sales of her songs) and licensed streaming versions of the song, which all appear before “infringing sites.”

With digital sales on the rise in Canada and copyright reform now complete, regulating the Internet, blocking websites, and manipulating search results is the last thing government’s should be mandating. Yet it seems that is precisely what the music industry once again has on its mind.

Music Canada is one of the instigators of the tax on blank recording media in Canada.  Their complaint back in 1997, when this tax was introduced, was that Canadians illegally downloaded music and burned it to CDRoms.  Since Canadian musicians suffered financially from this use of blank recording media the obvious solution was a new tax with the proceeds going to those same Canadian musicians.

A couple of years ago the morons in the New Democratic Party, led in this particular charge by Charlie Angus, wanted to place a $75 tax on iPods and hard drives for the very same reason.

As I wrote in my 2011 column “The iPod Tax and the Coalition of Ignatieff, Layton and Duceppe” :

I felt (and still feel) that this type of wealth re-distribution is appalling and disgusting.  If musicians can’t make a go of it, I’ll feel bad for them, but unless I like their music, I shouldn’t be forced to pay their rent.

But it’s typical of the Liberal mindset.  Someone’s got to pay.

Guilty until Proven Innocent.  It’s the mantra of every wealth redistributionist and censor in history.  It’s clearly the position of Graham Henderson and Music Canada.

We’re all guilty of crimes against Canadian musicians and must therefore pay.  Last time it was with our wallets, this time it’s with our internet search results.

Censorship is evil.  Censorship, like the tax on blank recording media over a decade ago, invokes the law of “Unintended Consequences”.

If you force me to pay you for your music even though I’ve never heard of you, you are an extortionist, pure and simple, and your actions will encourage people to do the very thing you don’t want them doing, downloading music illegally.

The logic is simple…

If you’re going to make me pay for something I’m not doing, then I might as well do it.

If you want to censor the entire internet because you believe you are “losing sales” of your music then you are an idiot who cannot comprehend the facts.  Or you’re a lousy marketer of your music.  Or both.

Billboard Magazine reported an increase in digital music sales in 2013.  Canadian musicians made more from online sales last year than ever before, but self-righteous yahoos like Graham Henderson and the organization he heads, Music Canada, aren’t interested in reality.

Graham Henderson and Music Canada want to censor your internet and steal money from your wallet even though you’ve never heard of them or their music.

Is that really the “Canadian Way?”

I sure hope not.