As I’ve written many times before Quesnel, BC, resident Arthur Topham is embroiled in a battle for his Right to Freedom of Speech. Those who dislike what Arthur has to say used both Section 13 of the Canadian Human Rights Act (now repealed) and the Criminal Code section against “hate crimes” to attack him and strip him of that precious right.

While Section 13 of the Canadian Human Rights was repealed by Parliament last year, that doesn’t change Arthur’s status under that Act.  Since the Section 13 charge against him was filed before the law was repealed he still faces prosecution under that now nonexistent section.

That case awaits the outcome of Marc Lemire’s constitutional challenge of Section 13.  Should Marc Lemire be successful, Arthur Topham and many other Canadians will finally be out from under the thumb of that atrocious law.

Should Lemire’s constitutional challenge fail then Arthur Topham’s charge under Section 13 will move forward despite the fact that law no longer exists.

So are the criminal code charges against Arthur.  If Arthur Topham is convicted under Criminal Code Section 319(2) it will send a very clear message to Canadians:

You are free to say only that which the government approves of and nothing else.

That is NOT the kind of Canada I want to live in.

Here is the latest update from Mr. Topham on the criminal case against him for the “crime” of speaking his mind and, according to Crown prosecutors, “wilfully promoting hatred against an identifiable group” including a brand new Criminal Code Section 319(2) charge for something Mr. Topham wrote “between the 29th of January, 2013 and the 11th day of December, 2013, inclusive.”

Defending yourself against everything you’ve ever written in a year is no small task and under our system of justice Crown prosecutors are not required to disclose what they’re talking about. 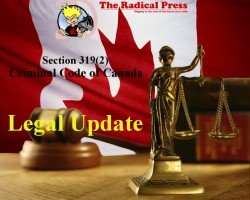 My last update of November 20th, 2013, focused mainly on the Rowbotham application I applied for in order to have Regina (the Crown) pay for a lawyer to defend me against her spurious section 319(2) “hate crime” charge that resulted in my arrest and incarceration back on May 16th, 2012.

That application was unceremoniously refused by Judge Morgan after a hearing held in the Quesnel court house on November 18th.

Since that date I’ve been back in court a few more times on related matters, the most recent being Tuesday, January 14th.

During the November 18th, 2013 Rowbotham hearing Judge Morgan brought up the matter of the particularization of the disclosure (the massive amount of purported “evidence” which the Crown intends to rely upon to justify their having charged and arrested me and stolen all of my computers and firearms back in May of 2012).

I made an application to the court back on April 10th of 2013 asking for further particulars and requested the Crown to be more specific as to what articles, posts, etc. on the website RadicalPress.com Regina felt were willfully promoting hatred against “people of the Jewish religion or ethnic group.”

After the Rowbotham application was refused I refiled that original April 10th, 2013 application asking the Judge to order Crown to further particularize my case.

Judge Morgan reserved his decision until I appeared once again January 3rd, 2014 on another related matter.

It was then that he handed down his Judgment and dismissed my application on the grounds that I was “seeking” “particulars relating to the Crown’s theory.”

In the Judge’s estimation,

“An order – as set out in his application – for the Crown to particularize the date and time and the exact statement or statements by which the alleged hatred was promoted would have the effect of limiting the Crown’s theory of the case; something that Krindle J. in Pangman (above) at paragraph 3, found there was no authority for and would amount to an extension of the existing law.”

It all sounds good in “theory” doesn’t it?

On December 2nd, 2013 I wrote another letter to CC Johnston regarding the matter of witnesses (or lack thereof) and that Crown was not planning to call either of the complainants (Richard Warman and Harry Abrams) nor the investigating officers (Terry Wilson and Normandie Levas).

As I’m sure you are well aware the preliminary inquiry is an important opportunity for me to cross-examine witnesses and gather relevant evidence for pre-trial Charter applications in Supreme Court. Much of the necessary evidence for the Charter applications will be put on the record at that time and therefore I feel it behooves the Crown, in the interest of justice, to call those persons specified above for cross-examination by myself, or, in the event I am able to procure counsel in advance of the January 22nd date, my legal representative.

I never heard back from CC Johnston on this matter and so I filed another application on December 30th, 2013, stating the reasons as:

“The complainants (Richard Warman and Harry Abrams) and the police investigators (Terry Wilson and Normandie Levas) are relevant and necessary witnesses for the purpose of the preliminary inquiry. The Crown is refusing to call these witnesses. I respectfully request that the Crown be compelled to produce these witnesses.”

As a result a hearing date was set for January 3rd, 2014. During the hearing Crown argued that they didn’t have to produce any witnesses they chose not to and downplayed the whole notion of the importance of the Preliminary Hearing process.

I was given a fourteen page document indexed as United States of America v. Shephard [1977] 2 S.C.R. 1067. This document, according to both Judge Morgan and Crown Counsel Johnston, clearing showed that the threshold to be met in order to justify ordering a trial to be held was so low as to be practically impossible to refute.

Prior to the January 3rd date the Judge had set another date of January 7th, 2014 for what is called a “focus hearing” which, translated into English, means a time to go over the ins and outs of what would transpire during the upcoming Preliminary Hearing on Jan. 22nd. He then decided to deal with that matter too on the 3rd and skip the Jan. 7th date.

It was during this hearing that Judge Morgan addressed the issue of the thousands of emails which were still on my stolen computers and had not been returned to me. I told the judge that they were relevant to my defence and that they should be returned as part of the disclosure package which had already been returned some months ago.

The judge concurred with my argument and after some discussion with Crown directed CC Johnston to contact Det. Cst. Wilson and have him return all of my email correspondence to me.

He gave the Crown until January 14th to prepare a response to his recommendation and it was on that date that I was to return to court to find out the results. When I appeared on January 14th I learned that the emails had been downloaded to a file that was supposedly being sent up to the Crown’s office and that I would be notified as soon as it arrived. Judge Morgan told me to contact Crown Counsel’s office if I didn’t hear anything after a couple of days.

It was also on Jan. 14th that I first learned that Crown would call Det. Cst. Terry Wilson of the BC Hate Crime Unit to appear at the Preliminary Inquiry.

Then, to top things off, came the surprise announcement by Crown Counsel Johnston that the Crown had filed a third count against me! It was a repeat of the original May 16th, 2012 sec. 319(2) CCC charge.

This new indictment, known as “Count 3”, had received the consent of the Attorney General of British Columbia on the 31st of December, 2013 and was signed by Peter A. Juk, QC Acting Assistant Deputy Attorney General.

The reasons stated were that I,

“Roy Arthur Topham, between the 29th of January, 2013 and the 11th day of December, 2013, inclusive, at or near Quesnel, in the Province of British Columbia, did by communicating statements, other than in private conversation, willfully promoting hatred against an identifiable group, people of the Jewish religion or ethnic origin, contrary to Section 319(2) of the Criminal Code.”

CC Johnston then added that no more disclosure would be forthcoming from her office as a result of this new charge until after the upcoming Preliminary Inquiry.  At that time an application would be made to the court for an order so that Crown might impose new restrictions on my Right to Freedom of Speech and prevent me from publishing any more truthful articles and opinions on RadicalPress.com.

One last thing. This morning, January 16th, 2014, I sent a letter to Crown Counsel Johnston informing her that I had subpoenaed two witnesses to appear in my defence for the Preliminary Inquiry slated for January 22nd, 2013.

“Please take notice that I have subpoenaed and will be calling two witnesses for the Preliminary Inquiry to be held on January 22nd, 2014.

Mr. Frank Frost will be appearing to testify on the urgency to maintain an alternative news media here in British Columbia in order to ensure that criminal activities on the part of the RCMP, the Judiciary and the Attorney General’s office (Crown) are exposed to the general public. Mr. Frost is a strong, knowledgable advocate and expert witness in the areas of children and family advocacy and pedophelia within B.C.’s judiciary.

Mr. Lonny Landrud will also be appearing to testify on the importance of maintaining an alternative new media. Mr. Landrud is an expert, knowledgeable witness in the area of judicial misfeasance as it pertains to his own case. Mr. Landrud was witness to a murder of a young woman in Quesnel by RCMP officers and subsequent to reporting this heinous crime to the RCMP has been the subject of numerous attempts on his life by the RCMP. In one instance Mr. Landrud was forced to shoot, in self-defence, an RCMP officer who was attempting to murder him in his home. Since the advent of these events Mr. Landrud has been unable to have his case investigated at any level of government after years of sincere effort and the mainstream news media has refused to investigate or cover his plight. Mr. Landrud will be speaking to the court on the pressing need for an alternative news media that will and does cover his untold story.”

The next few days will be spent preparing for the Preliminary Inquiry. I will send out another update sometime after January 22nd to let you know what transpired at event.

For Peace, Freedom of Speech and Justice for All,