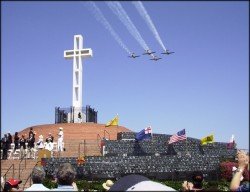 A Southern California District Court has ruled that a cross at the Mount Soledad Veterans Memorial in San Diego is a government endorsement of a specific religion and must be removed within 90 days.

The judge in the case, Larry Alan Burns, appeared to be choked up as he read his decision, saying that precedent from the wildly liberal Ninth Circuit Court left him no options. Burns immediately issued a stay of his order to allow lawyers for the defense to appeal.

The memorial has been the subject of legal battles for nearly a quarter of a century. The most recent round of litigation from the ACLU came after Congress in 2004 declared the memorial to be a national monument. There has been a cross at the Mount Soledad memorial since 1913.

Burns’ ruling yesterday hinged on the Ninth Circus’ decision in 2011 that the memorial cross “projects a government endorsement of Christianity.”

Congress noted in passing the 2004 law that the cross is surrounded by secular symbols and by symbols of other faiths, including 18 Stars of David. None of those symbols appears to have been subject of any lawsuits.

That’s noteworthy because the ACLU lawsuit was filed on behalf of the Jewish War Veterans of the United States, a group that should know better than to be promoting religious intolerance.

The ACLU called the ruling a victory, of course.

“We support the government paying tribute to those who served bravely in our country’s armed forces,” Daniel Mach, director of the ACLU Program on Freedom of Religion and Belief, said in a press release. “But we should honor all of our heroes under one flag, not just one particular religious symbol.”
“A national war memorial should stand for all of those who served,” added Norma Chavez-Peterson, executive director of the ACLU of San Diego & Imperial Counties, reported KNSD. “It is inappropriate and unconstitutional to declare a deeply religious symbol that excludes those outside of that faith as a monument to all veterans.”

The ACLU’s various representatives neglected to mention if they planned to sue over any other religious symbols at the memorial, but it’s a safe bet that the answer is no.

Once again, it’s the Christians who are being targeted and having their rights to freedom of religious expression suppressed.

The federal government had been defending the memorial until Barack Obama came into office. Since then, the Justice Department has shown only minimal effort in the case, prompting lawyers from Morgan, Lewis & Bockius, and the Religious Liberty Institute to step in.

The cross does not represent an establishment of religion as it is displayed in an area that is replete with other symbols as well. It merely represents an honor to our war veterans on behalf of the Christian segment of the community.

All these court decisions to remove crosses, the Ten Commandments and other Christian symbols will have one end effect: establishment of atheism as the state religion.

It’s particularly depressing that a Jewish veterans group would volunteer to be a pawn in the destruction of this monument.