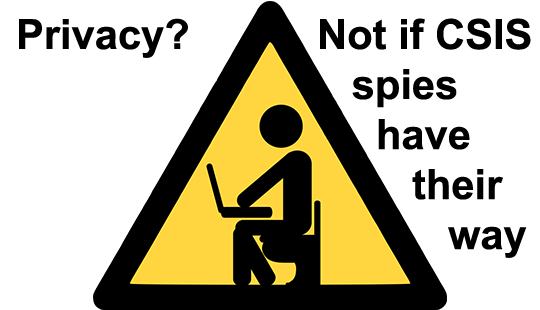 It’s as horrifying as it is becoming routine: Canadian police agencies lying to Judges in Court so they can keep violating the law they are supposed to uphold.  This time is the Canadian spy agency CSIS that’s caught in the spotlight.

Judge Richard Mosley wasn’t pleased when he discovered CSIS and the Communication Security Establishment of Canada (CSEC) lied to him.  Both agencies assured Judge Mosley the eavesdropping would be carried out from inside Canada when he granted special warrants for two Canadian citizens.  Both agencies then requested help from foreign intelligence agencies but refrained from informing the judge.

“It is clear that the exercise of the court’s warrant issuing has been used as protective cover for activities that it has not authorized,” Mosley wrote in redacted reasons.

Under current legislation, Federal Court has no authority to issue warrants that involve intercepts of Canadians carried out abroad by Canada’s “Five Eyes” intelligence partners. He said CSIS, which was granted several similar warrants on fresh or renewed applications in relation to other targets, knew the law but deliberately sought to get around the limitation by misinterpreting it.

“CSIS and CSEC officials are relying on that interpretation at their peril and … incurring the risk that targets may be detained or otherwise harmed as a result of the use of the intercepted communications by the foreign agencies,” Mosley wrote.

“[The law] does not authorize the service and CSEC to incur that risk or shield them from liability.”

“This was a breach of the duty of candour owed by the service and their legal advisers to the court,” he said.

“It has led to misstatements in the public record about the scope of the authority granted the service.”

Mosley made it clear the warrants do not authorize any foreign service to intercept communications of any Canadian on behalf of CSIS or CSEC.

Is it really a surprise that Canadian government agencies would lie to judges in a calculated effort to circumvent the law?

No, sadly it is not.

Author Peter Boer chronicles the good and the bad of CSIS in his book (pictured right), such as