“The press must grow day in and day out — it is our Party’s sharpest and most powerful weapon.”
— Josef Stalin 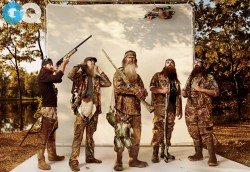 The past week was an enlightening one if you believe in Freedom of Speech, and not in a good way.

The Arts and Entertainment Network’s world-class display of hypocrisy made it clear that the Mainstream Media will dictate which opinions may be heard and which ones may not.  In doing so they showed how utterly ignorant they are of the reasons for Duck Dynasty’s success.

Duck Dynasty is a reality-TV show about a family of “rednecks” who also happen to be decent, God-fearing folk.  The hit show averages over 14 million viewers every week, which is over 2 million more viewers than the highly touted Breaking Bad finale.

The Robertsons also happen to be millionaires due to the innovation of their patriarch, Phil Robertson.  Decades ago Phil created a duck call, Duck Commander. He founded a company that set himself and his family up financially for life.

When A&E agreed to create a show based on the lives of the Robertson clan they knew Phil Robertson and his entire family were bible-believing Christians.  Despite that, the network felt it could “control” them and “manage” the message the Robertsons delivered every week.

A few months ago the network decided to edit “Jesus” out of the family prayer that ends every show.  That caused a firestorm of protest against the network both from the Robertson family themselves and from millions of the show’s faithful following.

A&E network executives completely missed the point of that protest.

Duck Dynasty is not A&E’s top rated show by accident.  The show is a hit because millions of viewers relate to the family values espoused each and every week, their goofy redneck antics notwithstanding.

This week the network declared Phil Robertson would no longer be permitted on the show because of his comments to GQ magazine where he spoke about sin.  Not just any sin, however.  Robertson spoke about the most politically-correct sin.

He called homosexuality a sin, just like adultery, theft, lying, drunkenness and murder.  He equated sin with sin.

“It seems like, to me, a vagina‚—as a man—would be more desirable than a man’s anus. That’s just me. I’m just thinking: There’s more there! She’s got more to offer. I mean, come on, dudes! You know what I’m saying? But hey, sin: It’s not logical, my man. It’s just not logical.”

“Everything is blurred on what’s right and what’s wrong,” he says. “Sin becomes fine.”

What, in your mind, is sinful? asks the reporter.

Then he paraphrases Corinthians: “Don’t be deceived. Neither the adulterers, the idolaters, the male prostitutes, the homosexual offenders, the greedy, the drunkards, the slanderers, the swindlers—they won’t inherit the kingdom of God. Don’t deceive yourself. It’s not right.”

“We never, ever judge someone on who’s going to heaven, hell. That’s the Almighty’s job. We just love ’em, give ’em the good news about Jesus—whether they’re homosexuals, drunks, terrorists. We let God sort ’em out later, you see what I’m saying?”

Phil Robertson committed the ultimate crime against Liberalism: he stated Biblical truth and A&E, the network that airs his show, simply could not stand it.

“We are extremely disappointed to have read Phil Robertson’s comments in GQ, which are based on his own personal beliefs and are not reflected in the series Duck Dynasty. His personal views in no way reflect those of A+E Networks, who have always been strong supporters and champions of the LGBT community. The network has placed Phil under hiatus from filming indefinitely.”

Duck Dynasty is the highest-rated cable show of all time.

Freedom of Speech issues aside, Duck Dynasty is reportedly worth a billion dollars annually to the network, which makes their firing of Phil Robertson all the more incomprehensible.

Killing their own cash-cow for the sake of political-correctness seems insane, even moronic, yet that is essentially what A&E did this week.  While a new season of Duck Dynasty is already filmed and will air starting in January, it will likely be the last season of the show, at least on the A&E Network.

“Phil Robertson and his family are great citizens of the State of Louisiana. The politically correct crowd is tolerant of all viewpoints, except those they disagree with. I don’t agree with quite a bit of stuff I read in magazine interviews or see on TV. In fact, come to think of it, I find a good bit of it offensive. But I also acknowledge that this is a free country and everyone is entitled to express their views.  In fact, I remember when TV networks believed in the First Amendment. It is a messed up situation when Miley Cyrus gets a laugh, and Phil Robertson gets suspended.”