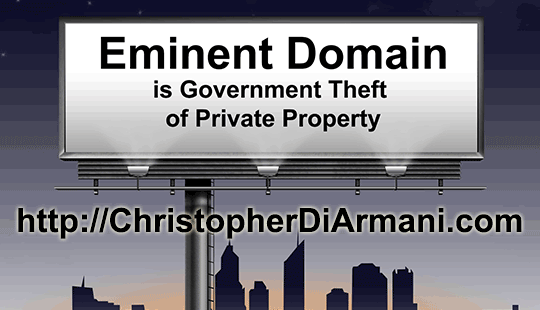 It was a landmark ruling when it first came out, cited by anyone with an ounce of common sense as the Death of Property Rights. While that assessment is correct, the eventual outcome of the land seizures by the Kelo v. City of New London US Supreme Court decision.

Why am I writing about an American court decision in a Canadian Rights and Freedoms Blog? We’re abusing the rights of mere citizens in Canada in precisely the same way as the Americans are in Kelo.

What sparked my interest was a WorldNetDaily.com article that explained just how wrong this decision was. After stealing the property of homeowners and handing it over to a private developer, the land was abandoned and eventually turned into a garbage dump. This hardly “furthers economic development” as the proponents of eminent domain claim, does it?

More than eight years after homeowners in the Fort Trumbull neighborhood of New London, Conn., were abandoned by the U.S. Supreme Court – in the historic and controversial “Kelo decision” – and watched as their modest homes on small residential lots were razed, a plan may finally be in the works to redevelop the area.

Ironically, tiny houses on micro-lots and a parking garage for a nearby office building is the recommendation of Mayor Daryl Justin Finizio.

The widely criticized 5-4 Supreme Court decision in 2005 employed a broad definition of “public use” that includes the government taking the property of citizens to turn over to private developers.

There is a name for the theft of the property of mere citizens for the good of the state: