I was wandering through the Toronto Police Service website last night and came across this article that really touched me.

Jeff Alderdice is a member of the Toronto Police Service.  He’s currently on a tour of duty in Afghanistan, stationed at the American Base at Walton, outside of Kandahar City.

When he heard the news about Sgt. Ryan Russell’s death at the hands of a snowplow thief, he had to do something.  He approached the commander of the base, Lt. Col. James Hayes, and asked for permission to fly the Toronto Police Service flag at half mast.

James granted permission, of course.  I mean, who wouldn’t in that situation, right?

“Being the only Toronto police officer at this base left me with very few options to express my personal grief and condolence,” Alderdice said. 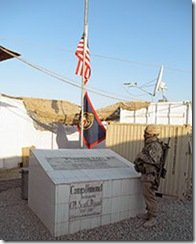 “I hope that this gesture will let the family know that we, including our coalition allies, are mindful of the great loss.”

What impressed me most was that Alderdice even HAD a Toronto Police Service flag with him in the first place.

My thanks to TPS for letting us know about one man’s effort, half a world away, to show he cares.

It’s nice to have some good news come out of the Toronto Police Service for a change, even if it is in the wake of some really BAD news…  the death of  Sgt. Russell.