That Pauline Marois proposes another Charter-violating law is hardly a surprise.

The woman who despises the Canadian flag so much she refuses to let it stand inside the Quebec Legislature (while hypocritically cashing our transfer payment checks, of course) despises pretty much everything about Canada except the money we shovel into her province each and every day.

There are many factions inside the province, however, who will refuse to abide by this atrocious piece of legislation should it actually pass.

From the cbc.ca article:

The movement against the secular charter is mounting as towns and universities in Quebec join the growing number of organizations refusing to implement the proposed ban on religious wear. At a meeting Monday night, the council of Hampstead — a suburb of Montreal — adopted a strongly worded resolution saying it will refuse to recognize the secular charter, if it’s passed.

“We will not comply with a racist and immoral law,” he said. “In the event that the Quebec government passes this odious bill, which will force people to choose between their religious beliefs and their jobs, it will not be enforced in Hampstead.”

As Hampstead council was adopting its new resolution, several hundred people held a rally at Côte St-Luc City Hall. Côte St-Luc is a historically multicultural suburb on the Island of Montreal.

Mayor Anthony Housefather said the rally was a way to unite the town’s Christian and Jewish communities, while also giving residents an opportunity to voice their opinions on the charter. The crowd, which included clergy and local politicians, gathered at city hall to light a Christmas tree and a menorah side by side. Housefather said Quebecers should be allowed to practise their religions freely, and dress however they want.

“I wanted to do something because my residents are angry, they’re upset. And so this rally gives them a chance to come out and tell the PQ government that we don’t agree with your views on the charter,” he said.  “We’re all equal Canadians, all equal Quebecers, and certainly in CSL, all equal Côte St-Lucers.”

Commenters online were not encouraging for the rest of Canada. Here is “the_cod” writing on the issue:

The governing party in Quebec could care less about this charter; they know that most of French Quebec backs it, so they are using it as a hopeful springboard to a non-confidence motion and defeat, causing another election that will allow them to run on the issue. Very slimy politics; bottom line, it’s against the Charter of Rights and Freedoms but they really don’t care in the “distinct nation of Quebec”. 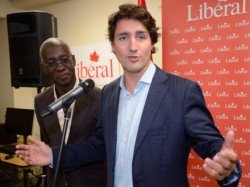 So long as we have a “distinct society” in Quebec that dictates how things will be in the rest of Canada there can be no united Canada.

Like his father before him, it’s Quebec first, everyone else last.