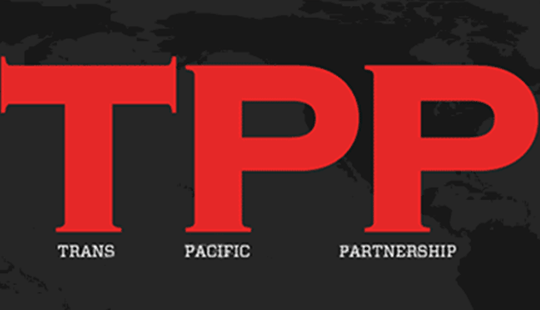 I’ve written about the Trans-Pacific Partnership recently and it’s destructive effect just on our Right to Privacy. That is not the only right this agreement would trample on.

When even the Left-Wing Idealogues like those at the Huffington Post are against the Trans-Pacific Partnership you know it must be bad! Please visit the Electronic Frontier Foundation for a detailed analysis of why and how the TPP violates our Rights and Freedoms.

Here is a little more information on this agreement and why Canada must pull out of it.

Monsanto’s about to celebrate their biggest coup ever, but we’ve got until the weekend to stop them. The Trans-Pacific Partnership is a huge, ultra-secret deal between Canada and 11 other countries that would give corporations unprecedented power — allowing them to use new global tribunals to sue our governments for passing laws that protect us, but reduce their profits! This could apply to everything from labeling GMO foods to protecting internet freedom. Wikileaks has broken the story and opposition is building fast, but the countries are rushing to seal the deal in 48 hours.

This is insane, but we have a chance to stop it — if we can get Canada to pull out now, the whole deal could crumble. Let’s deluge our Trade Minister Ed Fast with a call to stand strong and stop this corporate takeover before Monsanto uncorks the champagne. Sign up now and share this with everyone:

The leaked Trans-Pacific Partnership drafts read like an extended Christmas wish-list for big business — it would set a global standard of companies imposing their will on our governments through an opaque system of tribunals.

These courts could limit access to cheap generic medicines in favour of branded medicines, and even allow US cigarette companies to sue our government over health regulations that they say threaten profits! It’s almost too crazy to be true.

But practically no one has heard of the TPP! The talks are so secretive that not even our elected lawmakers know what’s in it — just the negotiators and 600 corporate lobbyists. Now leaked texts have shocked politicians and citizens worldwide. And they are pushing back on the corporate bullying, and against the US that is hell-bent on getting a deal agreed before there is too much public scrutiny.

It can be easy to feel small in the face of big corporate forces driving our governments. But people, not money, are the true source of power. Time and again, our community has proved that when we come together to protect our rights against corporate takeover, we can win. Let’s now stop this unprecedented threat to our democracies.