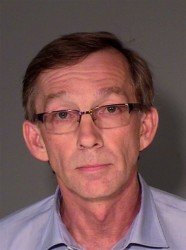 An Alberta politician has resigned from the governing Progressive Conservative caucus after being arrested by Minnesota police in a prostitution sting.

Mike Allen, the member of the legislature for Fort McMurray-Wood Buffalo, was arrested by St. Paul police Monday night.

Allen, 51, was in the city attending a midwestern legislative conference.

The story on the website of the St. Paul Pioneer Press newspaper reports that police allege Allen responded to an ad, met two female undercover officers and agreed to pay for sexual services.

Allen says in a statement that he takes full responsibility for his actions.

“I apologize to my family, friends, my constituents, my colleagues, my staff and to all Albertans for the embarrassment I have caused and for failing to live up to the standards expected of me and the standards I expect of myself,” he said in the statement released Tuesday.

“I made this mistake of a profound lapse of personal judgment. It is my mistake, for which there is no excuse, and for which I accept full responsibility.”

Allen has also resigned from all legislative committees he sits on, but will continue to serve in the legislature as an Independent.

“This is a deeply embarrassing moment and all I can say is I am sorry and humbly ask for forgiveness,” he said. “I will work long and hard to regain the trust of the many I have let down.”

Tory whip Steve Young said Allen called him Tuesday morning, told him about the arrest and offered his resignation. Young accepted it.

You will notice Steve Young merely accepted Mike Allen’s resignation from the Progressive Conservative caucus, NOT his resignation as an MP.  Despite his morally questionable antics in Minnesota, Mike Allen is thoroughly unwilling to give up his seat at the public trough.

No, he will hang onto his seat, his fat MLA paychecks and his pension… No point giving any of that up just because of a little bad publicity, right?

By attempting to wrap himself in the Flag of Integrity, Mike Allen actually proved he has none instead.

If he were serious and sincere in his apology to his constituents he would immediately resign his seat and forgo those fat paychecks.  He won’t.  He likes sucking on the public teat just a little too much to let a little thing like integrity get in the way.

After all, it’s not like he’s a Liberal Senator living in Mexico for ten years while collecting fat Senate pay, right?  It’s not like he’s even as bad as Mike Duffy and the entitlement mindset so common in that august body of sober second thought.

He’s just an MLA doing what MLAs do best.

Pretending to be apologetic, honourable, decent and filled with integrity when he has little to none at all…