Brenda Kenny, president and CEO of the Canadian Energy Pipeline Association, wrote an article published in the Vancouver Sun on September 17, 2013, whose title caught my attention solely because it was so absurd.

Her article, titled “Freedom of speech includes right to be heard”, was a defense of oil sands production and the reversal of a pipeline to send Alberta’s oil to eastern Canada. She starts off by stating this:

As Canadians, we are fortunate enough to live in a country where we have the ability to speak our mind on issues that matter most to us. It is a fundamental right under the Charter of Rights and Freedoms. And, at the Canadian Energy Pipeline Association, we believe in this right, too.

No problem.  That makes complete sense and I am in complete agreement with Ms. Kenny.  It’s in her next paragraph where she goes wildly off the rails.

We believe that, as a productive member of a democratic society, it is important for all Canadians to be heard.

The statement that “it is important for all Canadians to be heard” is fine on its face; transforming how we like “being heard” into a Right is something else entirely.

The Right to Freedom of Speech has absolutely nothing to do with “being heard.” 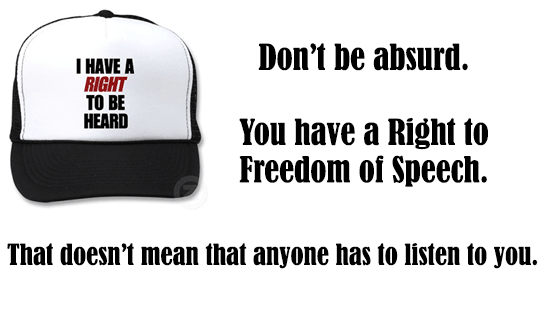 Freedom of Speech is solely and specifically about the right to speak your mind.  It has absolutely nothing to do with forcing others to listen to what we have to say, no matter how much we may want them to listen.

For example, I am exercising my Right to Freedom of Speech by writing this article.  For me to believe that, simply as a function of writing my this article, I have the right to force you to read it is ludicrous.

Kenny’s article discusses a lawsuit over the reversal of a pipeline that’s been operational for decades.  Canadian anti-oil zealots oppose reversing the pipeline even though they cannot bring forth a single coherent and sensible argument for that opposition.

These anti-oil forces (while hypocritically using oil to transport themselves around the globe) are currently trying to force the National Energy Board into endless public debates over this pipeline reversal, something that makes no sense whatsoever.

She succinctly describes the pipeline in question:

The hearing that the lawsuit refers to is a proposal to re-reverse a pipeline built decades ago. The pipeline was built in the 1970s to supply oil from Western Canada to eastern Canadian refineries after the Organization of Petroleum Exporting Countries embargo. The pipeline was reversed in the 1980s due to changing market conditions. Now, the pipeline operator is looking to reverse it once again.

Essentially the anti-oil lobby is trying to say, through this lawsuit, that their Right to Freedom of Speech is violated by the changes made to the regulatory process.  They’re upset they cannot tie up that process endlessly.

There are limits on the process, of course, but none that stop anyone from speaking their mind on the issue.  It simply stops an endless parade of people and groups from saying the same thing over and over again for years, stopping a project from moving forward simply so a debate can rage on without end.

Brenda Kenny’s article is good and helps shed some light on the current process and I highly recommend you read it and other articles on the subject to fully inform yourself about this issue.

We use oil and gas every day to heat our homes and businesses, move us to and from work and even, as shocking as it is to say out loud, to transport anti-oil activists to the very hearings they want to bog down.

My problem is that Kenny uses a lousy premise to advance her position, even though I agree with that position.