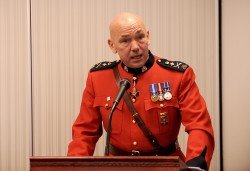 It took over a week but RCMP Commissioner Robert Paulson finally came out of hiding to face Canadians about the criminal actions of his force in High River, Alberta.

Well, he didn’t actually come out of hiding to face Canadians.  He merely published a letter to the Commission for Public Complaints Against the RCMP on the RCMP’s website.

He still hasn’t reached down into his pants to find his testicles as far as anyone can tell.  Had he done so (and found them), perhaps he would actually face media questions over the criminal actions of RCMP in High River.

But he won’t do that.

Despite the Prime Minister’s office expressing its displeasure with RCMP gun seizures in High River immediately, Canada’s top cop hid from the world for another 7 days before finally surfacing, albeit only in writing.

Paulson, in a letter to Ian McPhail, the head of the Commission for Public Complaints Against the RCMP,  wrote he is

“quite concerned by the sharp criticism that has arisen in the media with respect to the gun seizures from evacuated homes.   Naturally this is quite troubling to me, and I am sure to you, as indeed it must be to many Canadians who wonder what was going on in High River.”

I’m thrilled to see Commissioner Paulson is “quite concerned” with the criminal actions of his men who broke into the locked homes of High River residents and stole their guns.

There are many emotions Robert Paulson ought to feel other than “quite concerned”, however, such as livid, outraged, appalled, nauseated, shocked, angry, sickened, scandalized, repulsed, revolted, embarrassed…

I could go on but you get the point.

He’s concerned about image, not substance.

That the Commissioner of the RCMP, our nation’s top cop, cannot comprehend we mere citizens are protected by this little thing called the Charter of Rights and Freedoms is appalling.

That our outrage over the thieving and criminal actions of RCMP members, supposedly there to protect High River residents and instead became their victimizers, doesn’t sink in to Commissioner Paulson does not leave much hope that the RCMP can ever be fixed from within.

The internal culture of “us versus them,” where anyone not wearing the RCMP red serge is the enemy, is so deeply ingrained and worsening with every passing day.

That is abundantly clear by Commissioner Paulson’s request for an investigation because of his “concern” over the criticism the RCMP faces from media, not because he thinks anything vile festers unmolested inside in the High River RCMP Detachment.

He doesn’t give a crap that RCMP members violated the civil rights of hundreds of families.

He doesn’t give a crap that High River RCMP trampled their muddy jackboots all over Canada’s Charter of Rights and Freedoms.

He doesn’t care that his own members kicked in doors and stole private property.  He only cares that the “image” of the RCMP might take a hit.

He doesn’t care that the RCMP psychologically raped every single citizen of High River by violating their privacy and their trust.

He only cares that the RCMP faces “sharp criticism” by members of the media.

Thank God for Sun Media otherwise Paulson would have never, I’m sure, written to the RCMP Complaints Commission and requested an investigation.  They’re the only network in the nation that’s still focused on this story and still demanding answers from the RCMP.  Answers that are still not forthcoming either.

The lesson for Canadians is really quite simple, isn’t it?

That is repulsive on every level.

With every passing week the RCMP manages, by their own reprehensible actions, to guarantee we mere citizens will hold them in greater and greater contempt.

How can we possibly trust a police force that holds the Charter of Rights and Freedoms in such contempt?

How can we trust an RCMP headed by a Commissioner who cares only about the image of the RCMP and not the Rights and Freedoms of Canadians; rights the RCMP is there to protect, not violate?

What will it take for the RCMP to comprehend we mere citizens have rights that cannot, or at least should not, be trampled by agents of the state whenever the whim seizes them? 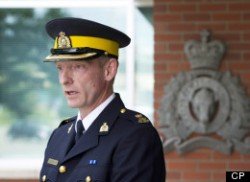 Remember the words of RCMP Inspector Garrett Woolsey when he spoke of breaking into homes and stealing firearms from residents during the Slave Lake and High River evacuations? Inspector Woolsey said,

That really says everything that needs to be said.

It’s “not remarkable” for the RCMP to violate the Rights and Freedoms of Canadians.

Two years ago it was residents of Slave Lake who suffered under the jackboot of the RCMP.  Last week it was the residents of High River.

Whose town will be next?  That remains to be seen.  That there will be a “next town” is guaranteed though, isn’t it?

I’ll leave you with a prediction, and one that leaves my heart heavy with disgust.

The Commission for Public Complaints Against the RCMP will eventually find the following: 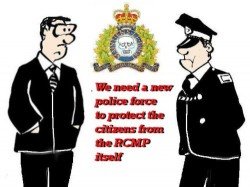 Not a single head will roll.  Not a single RCMP member will be reprimanded or fired for the criminal actions of break and enter and theft of private property in High River, Alberta.  Not one.

The RCMP will be completely exonerated.

I, on the other hand, will probably face an RCMP investigation of my own for being a “bad Canadian” not respecting the RCMP.

The official charge will, of course, be unsafe storage of firearms, won’t it?

Naturally they’ll have to kick in my door and pry open my gun safe in order to get their “proof” but as we’ve seen in High River, Alberta, breaking and entering isn’t something that’s stopped the RCMP before.  It won’t stop them then either…

Yours in Liberty (and disgust)