What does a burning Ukraine Police Station and the High River RCMP have in Common?

Both police forces have no respect for their citizens or the Rule of Law.

In the town of Vradiyevka, Ukraine, roughly 330 kilometers south of Kiev, furious protesters took to the streets after authorities refused to arrest a police officer suspected in the brutal gang-rape of a young woman in June.

Police armed with tear gas attempted to fight off angry citizens but were unable to save their police station from destruction. It shouldn’t take massive public outcry for a suspected rapist to be arrested, especially when that rapist is a cop, but that’s exactly the case in the Ukraine today.

It wasn’t until after angry citizens burned down a police station that authorities finally arrested the rapist cop, but even then they didn’t want to place him in lockup.  They wanted to release him on a promise not to leave his home.  Yes, that’s exactly what they wanted to do.

We can’t trust this cop to behave like a decent human being, but we’re to trust him when he says he won’t leave his home?

The victim, a 29-year-old local woman, was returning home from a bar last Wednesday when she says she was shoved into a car, driven to the woods, raped and savagely beaten by two policemen, aided by a driver. The woman remains in the hospital in serious condition, having sustained multiple fractures to her skull and bruises all over her body.

When cops become victimizers the rule of law breaks down.  When citizens cannot trust the police, civil unrest is inevitable.  When police refuse to arrest the perpetrators of criminal acts simply because those perpetrators are cops, the entire justice system is tossed on the trash heap.

While RCMP members didn’t rape anyone in High River, Alberta, they accomplished exactly the same thing as the police did in Vradiyevka, Ukraine, when they refused to arrest the rapist simply because he was a cop.  They completely undermined public trust in our national police force.

While RCMP members did not rape individuals, they certainly raped the privacy of every resident in High River, Alberta, didn’t they?

As more and more details come out about the actions of RCMP in the flood-ravaged town, the worse the public relations nightmare gets for the RCMP.  I certainly don’t feel bad for the them.  They brought this PR nightmare on themselves by publicly and proudly crowing their own criminal actions. 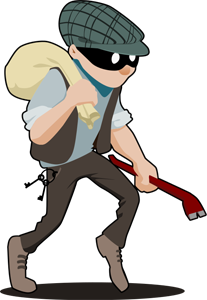 Today we saw video of a home that was never under water, was never in danger of flooding, yet RCMP kicked in High River resident Cam Flurry’s door and then broke into the locked closet housing his gun safe.

RCMP spokes-critters continue to blatantly lie to us without shame or remorse. That’s really not helping their cause.

The first press release crowed proudly that they “seized” firearms from homes and broke down doors.  After public outrage made it clear the public was not on the side of the home invaders armed with badges, guns and crowbars they began backpedaling, saying they were merely “securing” firearms for their owners because firearms are valuable.

So far there are no reports of these RCMP thieves stealing jewelry collections or flat-screen televisions despite their obvious value, but the RCMP continues to defend its heinous and Charter-violating actions.

Worse, Public Safety Minister Vic Toews is literally missing in action.  He released a pathetic and mewling statement initially, but nobody seems able to find him since.

Instead of cowering in the shadows the Minister of Public Safety should be standing tall in High River, Alberta, ordering RCMP to deliver firearms back to every home they stole them from, force them to pay for the damage they caused out of their own pockets, then fire every single RCMP member who partook in the thievery.

When we see photos of muddy footprints going directly to closets where guns were seized, and those footprints go nowhere else EXCEPT directly to the closet, it is clear to anyone with a brain capable of the simplest thought that the RCMP is lying.

While the RCMP continues to claim there was no order given to seize firearms, that simply doesn’t pass the Smell Test, does it?

And where is RCMP Commissioner Robert Paulson in all this? Nobody knows.  I cannot find a single reference of him and the criminal actions of his police force in High River in the same article.

Robert Paulson took over the RCMP on a ticket of “reforming” the RCMP, yet under his watch criminal acts by RCMP members continues to rise.  When his members blatantly and without repercussion violate the Charter Rights and Freedoms of Canadians there is no Rule of Law in Canada any longer.

There is only the Tyranny of the RCMP, since they make up the rules as they see fit, break into people’s homes, search the homes they break into without a warrant, then steal with impunity.

Nobody has the cohones to hold them accountable, not even the man who claimed his job was to “clean up the RCMP” and “restore” its public image.

At least the Prime Minister had the stones to tell the RCMP to return everything they stole the instant he heard about their atrocious and illegal search and seizure operation.  For that I give Harper full marks.

As for Commissioner Paulson, if you’re out there somewhere and really want to do something to restore public confidence in the RCMP, there is a simple 3-step process you can implement immediately.  I guarantee it will raise your profile and the profile of the RCMP a dozen points overnight.

It’s a very simple issue for we “mere citizens”.

We comprehend that ordinary beat cops will not break into people’s homes, search them without a warrant and steal private property without orders from someone.  That someone must be held accountable.

If that order came from a politician, then publicly name that politician immediately so we “mere citizens” can recall that elected official.  That person clearly would not be fit for public office if they hold the Charter Rights and Freedoms of Canadians in such contempt.

If the order came from within the ranks of the RCMP fire that person immediately, as they clearly are not fit for duty since they hold the Charter Rights and Freedoms of Canadians in such contempt.

Until last week most Canadians believed we lived in a land that GUARANTEED the Charter Rights and Freedoms of its citizens.

We don’t believe that any more, and that’s the real crime these thieves wearing RCMP uniforms committed against us.  They robbed us, not only of our privacy and our firearms, they robbed us of our belief the police are here to help us.

Now we understand the RCMP isn’t interested in helping us at all.  It’s only interested in pursuing its own political agenda and, like all good tyrants, is will “never let a crisis go to waste”.

As I wrote last week in my article “High River RCMP Looters are CRIMINALS and must be treated as such IMMEDIATELY”,

If you know anyone who lives in High River, Alberta, who had their home broken into by the RCMP and their private property stolen… er removed for their own good… then please urge them to do the following:

1. File an official complaint with the RCMP Complaints Commission (http://www.cpc-cpp.gc.ca/cnt/srv/mac/forms/ocf-fpe-eng.aspx) or email to complaints@cpc-cpp.gc.ca.

3. Photograph the evidence of the break and entry.  Send copies of those photos with a description of the RCMP ransacking of their home to the Mayor of High River, their local MLA and MP and to the Prime Minister of Canada (pm@pm.gc.ca).

4. Send copies of the photos and the description of the RCMP looting of their home to Brian Lilley at Sun TV (byline@sunmedia.ca).

5. Send copies of the photos and the description of the RCMP thievery to every local, provincial and national newspaper in the country. Heck, send me a copy and I will post it here, minus personally identifying information, of course!

6.  Send copies of photographs and the description of RCMP thievery to the Canadian Shooting Sports Association (info@cdnshootingsports.org) and the National Firearms Association so they can bring the evidence to their contacts in government as well.