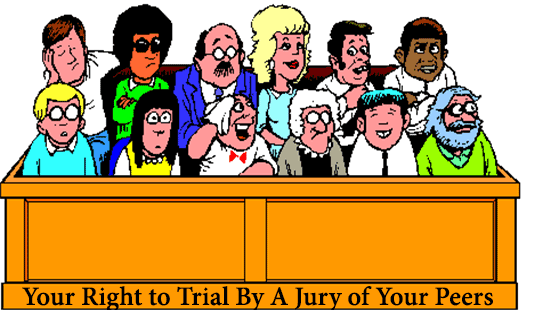 At first blush the Ontario Court of Appeals ruling that tossed out the manslaughter conviction against Clifford Kokopenace seems absurd. Kokopenace and his lawyer successfully argued that because there were no First Nations people on the jury the trial itself was unfair and constituted a breach of Kokopenace’s Charter Rights.

Actually, at first glance the ruling in R. v. Kokopenace, 2013 ONCA 389 seems retarded.  Taken to its absurd conclusion, no murderer should be convicted unless his jury contains murderers on it, since those would be “his peers” right?

Upon closer examination, however, the Ontario Court of Appeals result is far less absurd than it first appears.

The decision essentially comes down to this:  If the population of an area is, as in the case of Kenora, Ontario, 65,000 people and one third of those live on reserves, then that population should be represented in the jury pool for any given year.  That does not mean that every jury will contain one-third aboriginal people, only that the jury pool from which a jury is drawn should be equitable with the population of the region as a whole.

If the native representation of the Kenora jury pool was 25% instead of 33% I highly doubt the Appeal judges would come to the conclusion they did.  However, since the native population represented in the jury pool was only 4% it’s a lot harder to say the jury selection process was fair and equitable.

[11]     In geographic terms, the District of Kenora is Ontario’s largest. It makes up about one-third of Ontario’s land mass. The judicial center is the city of Kenora, where the Superior Court of Justice sits, and where this appellant was tried. There are a large number of Indian reserves in the District, many of them remote from the city of Kenora and many accessible only by air. According to the 2006 census, the total population of the District was approximately 65,000. The on-reserve population is roughly one third of that total.

The major issue of the appeal was Section 11(d) and (f) as well as Section 15 of the Charter of Rights and Freedoms.  These sections read as follows:

Citing precedent a case, R. v. Sherratt, 1991 CanLII 86, where “representativeness right was an essential component of the s. 11(f) right to trial by jury” the appeal judges wrote,

[27]     The representativeness right guaranteed by these two subsections of the Charter must inform the entire process of jury selection. Only if the process begins with a properly representative jury roll, can the petit jury randomly derived from it have the required element of representativeness as described in Sherratt. In this appeal, it is the appellant’s right to a representative jury roll, what that means, and whether it was achieved that is at stake.
[28]     The Charter right to a representative jury roll serves several important objectives. First, it is a means of ensuring that any petit jury derived from that jury roll is an impartial decision maker. The representative character it brings to the jury composition process allows the jury to act “as the conscience of the community”, as L’Heureux-Dubé J. said in Sherratt at 523. Second, it serves to build public knowledge of and trust in the criminal justice system.

After examining R. v. Church of Scientology 1996 CanLII 1650 (ON CA) which they call the “seminal case” on this issue, the Ontario Court of Appeals writes

[31]     The right to a representative jury roll is thus not an absolute right, but an inherently qualified one. The right does however require the state to use a jury roll process that provides a platform for the selection of a petit jury that serves the objectives of impartiality and enhancing public confidence in the criminal justice system. Essential to achieving these objectives is that the distinctive perspectives that make up the community are provided a fair opportunity to be included in the jury roll, and to be brought to the jury function. In this way the jury can serve as the conscience of the community as the representativeness guarantee requires.
[40]     In this case, there can be no doubt about the importance of the Aboriginal on-reserve perspectives. Aboriginal on-reserve residents constitute a significant portion of the population in the Kenora District, and although all Aboriginal on-reserve residents would not necessarily approach their task in the same way, their race, their shared heritage and their on-reserve life experiences bring important and distinctive perspectives to their jury service. As Scientology tells us, to be Charter-compliant, the state’s process for preparing the jury roll must bring to the petit jury function the possibility of the inclusion of these distinctive perspectives.
[49]     In my view, to meet its representativeness obligation, the state must make reasonable efforts at each step of creating the jury roll. That includes the state’s actions in compiling the lists, but also in sending the notices, facilitating their delivery and receipt and encouraging the responses to them. The objective of the state’s actions must be to seek to provide the platform necessary to select an impartial petit jury and to maintain public confidence in the criminal justice system by providing groups that bring distinctive perspectives to the jury process with their fair opportunity to be included in the jury roll.

The conclusion, then, is predictable and I believe correct.  If we non-aboriginal Canadians want “one law for all people” then we must insist that all Canadians be treated equally before the law.  The Ontario government clearly failed on this count, as is explained by the final paragraphs of this ruling.

[275]   It is sufficient to repeat that the state left the serious challenge of low response rates with a junior employee.  Through her, the state response, repeated year after year up to and including the 2008 jury roll can only be described as a failure.  No attempts to engage with Aboriginal leaders appear to have been undertaken to determine the causes of prior response rates or what other ameliorative efforts might be undertaken by the state to encourage responses.
[276]   I do not think that a failed response, coupled with a failure to explore other steps the state might have taken to help, can be said to constitute the reasonable efforts required of the state to address this problem and do what it reasonably could to provide Aboriginal on-reserve residents with a fair opportunity to have their distinctive perspectives included in the 2008 jury roll.  The challenge of low response rates was serious.  It required more from the state.
[277]   In summary, I would conclude that because of the state’s failure to make reasonable efforts to facilitate delivery of questionnaires to Aboriginal on-reserve residents and to encourage responses to them, Ontario failed to meet its constitutional obligation to the appellant in the preparation of the 2008 jury roll in the District of Kenora.

Is this sufficient justification for setting a previously-convicted killer free?  Absolutely.

“It is better that ten guilty persons escape than that one innocent suffer.”