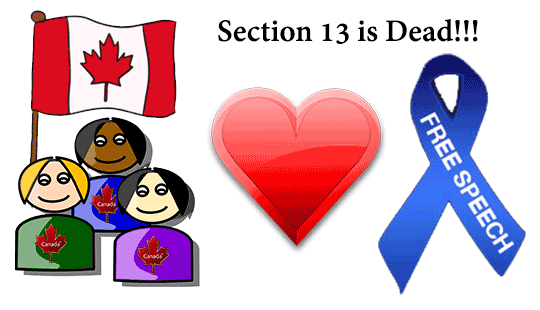 Shortly after hearing the Senate would stick around a little longer to deal with outstanding legislation I was pleased they would finally deal with Brian Storseth’s Private Member’s Bill C-304 to repeal Section 13 of the Canadian Human Rights Act.

Imagine my shock and surprise to receive an email from Marc Lemire this afternoon trumpeting the great news that the Senate passed Bill C-304 today!

It’s a great day for Freedom and Liberty in Canada!

News is just breaking across Twitter that the Senate of Canada has finally passed third-reading on Bill C-304, which is an Act to repeal the censorship provision – Section 13 of the Canadian “Human Rights” Act.

Section 13 makes it an offence to “likely” “expose” privileged groups to “hatred and/or contempt.” There are NO defences under Section 13!  Even truth and intent are considered irrelevant to a finding of discrimination. The law was enacted in 1977 in order to silence a man named John Ross Taylor for messages he recorded onto his telephone answering machine. In the intervening 32 years, not a single person who has been hauled up on Section 13 charges has ever been acquitted – a 100% conviction rate.  Section 13 has been used and abused since its inception.

Here are a few selected Tweets about it:

Brian Storseth ?@BrianStorsethMP : Thx to Sen. Finley for his work on C-304 his commitment and work on making Canada a freer country, will be his legacy! #cpc2013 #C304

Brian Lilley ?@brianlilley : Just being told Bill C-304 to repeal the dreaded section 13 of the Human Rights Act has been passed. A good step for free speech. #cdnpoli

You can watch Brian Storseth’s testimony from yesterday Senate committee on Bill C-304 and why Section 13 is such an affront to freedom and liberty.