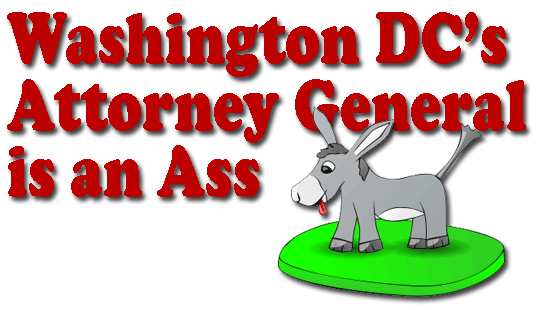 Washington, DC, is arguably the stupidest place on the planet. Not only is it filled with thoroughly myopic and self-absorbed politicians intent on running rampant over the nation, its bureaucrats despise the very Constitution Washington, DC, is supposed to “protect and defend against all enemies, foreign and domestic”.

This past January 3 pitbulls attacked and mauled an 11-year-old boy at the corner of Eighth and Sheridan streets. The attack was witnessed by DC resident Benjamin Srigley, who ran inside, grabbed his firearm, came back outside and shot one of the dogs. The wounded dog ran up the street to its home, leaving a trail of blood the entire way.

A DC bike patrol police officer heard the shots and arrived on scene where he promptly shot and killed the other two dogs. Together, these two brave souls undoubtedly saved this boy’s life.

“The injuries are terrible,” the boy’s uncle said, adding that he saw all three dogs with their teeth clenched on the youth’s extremities when the neighbor and officer opened fire. “This boy is traumatized. He told me doesn’t want to go outside anymore. He’s too scared.”

That’s hardly surprising, is it?

I feel for this poor boy. His “crime” was simple: he rode his bike down the street he lived on while 3 unleashed and unattended pitbulls prowled in search of something when they found him.

The great thing about this story is that the boy is alive and recovering from his wounds and is therefore ABLE to feel anything at all, be it fear or any other emotion.

It is a criminal offense in Washington, DC, to possess unregistered firearms and ammunition. Yes, even possession of ammunition is a crime… even if you don’t possess a firearm. Gotta love gun-hating bureaucrats.

Ted Gest, spokesman for the District of Columbia Attorney General’s office, acted like it was him, not Benjamin Srigley, who was the Good Samaritan.

As part of the agreement not to prosecute him Benjamin Srigley, 39, was required to pay a $1,000 fine but will not have criminal charges filed against him for the three unregistered firearms and the ammunition that investigators found in his possession, said Ted Gest, a spokesman for the office of the attorney general.

Possession of an unregistered firearm or ammunition in the District is punishable by up to a year in jail and a $1,000 fine, and prosecutors said Mr. Srigley could have faced up to seven criminal charges in the case.

“In our recent memory this is a unique charge because of the unusual circumstances of this case,” said Mr. Gest, whose office generally prosecutes low-level crime in the District.

Intellectual Giants like Ted Gest are incapable of understanding the Law of Unintended Consequences.

They are incapable of comprehending that their treatment of Benjamin Srigley, what they self-righteously call a “favour”, just guaranteed that the NEXT time a kid is mauled in the streets by dogs (or criminals), anyone with any unregistered gun who could save that kids life, won’t.

The important thing is that Ted Gest and the DC Attorney General’s Office set an example in the war on guns.

So what if it costs someone their life?