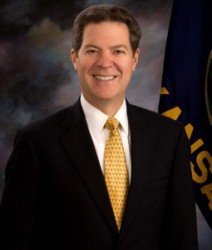 Kansas Governor Sam Brownback signed House Bill 2162 into law the other day guaranteed to turn anti-gun zealots into spittle-soaked rage-aholics.  No longer will public money be used to undermine the Second Amendment of the United States Constitution.

A statement from Governor Brownback, released after he signed the bill into law, said in part:

This is a great thing.

It’s also a bellweather of things to come.

Many states have already passed laws, just as Kansas did with its “Second Amendment Protection Act”, an Act that prevents federal employees from enforcing federal gun laws inside their state.

With HB 2162 Kansas has now raised the bar, and they’ve raised it high indeed.

To President Obama he said loudly and clearly,

Keep your paws off our guns.  While you’re at it, stay out of our state.

To lawmakers in every other state in the Union Brownback said,

What’s the holdup?  Why aren’t you supporting and defending the Constitution like you swore under oath that you would when you took office?

Those two messages made my day.  Seeing a politician stand up for the Rights and Freedoms of his citizens is heartwarming indeed.

Now, if you live in any of the other states in America that haven’t brought in similar legislation in defense of the Second Amendment, today would be a great day to contact your State Legislators and demand they do so immediately.

If Kansas can do it, surely your state can too.

Well, except for those morons in Colorado who are still intent on driving every gun-related business out of that beautiful state.  The good folks of Colorado have their work cut out for them in Denver, but recall efforts are well underway.

Thinks may just turn out all right there yet.