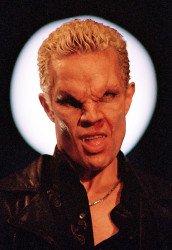 One of my favourite characters from the now-finished television series “Buffy the Vampire Slayer” was Spike, played by James Marsters. Spike had a great sense of humour and with rare exception viewed the human race with disdain. One of his best lines of the series was when he said,

In the wake of recent, and some would say not so recent, developments in the Conservative (in name only) Party of Canada, it could easily be said of Stephen Harper that he, like Buffy’s character Spike, view Canadians with disdain.

“I love the mere citizens of Canada. They’re little Meat Puppets with wallets!”

Take, as a prime example, Brent Rathgeber’s private members bill to make government more accountable and transparent. Rathgeber’s bill, if passed as originally written, was far from perfect, but it was still light-years ahead of what our so-called conservative government passed into law this week.

Rathgeber’s original bill would have revealed to Canadians every federal civil servant who earned more than $188,000 per year. That’s
over four times the average Canadian’s annual salary and almost twice that of a similar law in Ontario for its civil servants.  Like I said, it’s far from what I or any other citizen wanting a fiscally-responsible government would want.

There are “Sunshine Lists” in many provinces, none of which set the bar even close to Rathgeber’s $188,000.

I found comments that Newfoundland has a similar law but could not find a source document to confirm that.

Does the Harper government believe the “mere citizens” of Canada have a right to know what we, their employers, pay our employees?

No, our so-called conservative government decided this past week that we “mere citizens” have no need of such information. All that’s required of us is that we stand still, shut up and open our wallets to be looted at will.

For the sake of easy math  let’s call the average Canadian’s annual salary $40,000.

To put all this in perspective, a first-term Member of Parliament earns $160,000 plus expenses.  Yes, you read that correctly.

These gluttonous politicians vote themselves pay rates over 4 times the national average working family and then add expenses on top of it. As horrifying as that gluttony is; as self-important as MPs think they are; this all pales in comparison to what Harper’s Conservative-in-name-only government did with MP Brent Rathgeber’s bill.

Clearly thinking that $188,000 is far too low a threshold for the mere citizens of Canada to comprehend, the morons in Ottawa raised the bar to over TEN TIMES the average Canadian’s annual salary before allowing a bureaucrat’s name to be revealed.

MP Brent Rathgeber resigned from the Conservative Caucus in disgust.  I commend him for that.  It shows character.  It shows he stands on principle.  It shows he is actually a conservative, so unlike the party he just quit.

I had to laugh when I saw political opponents, many from his own former party, calling on him to resign his seat and run in a by-election because the voters of “Edmonton-St. Albert elected a Conservative MP.”  What those good people elected was a man to represent THEIR interests to Ottawa, not represent Ottawa’s interests to them.

As Andrew Coyne so aptly wrote,

It is tempting to describe the resignation of Brent Rathgeber from the Conservative caucus as an extraordinary event. And in some ways it is: It surely required extraordinary commitment to principle, not to say courage, to walk away from his party as he has. The consequences, in terms of personal friendships as much as career prospects, may be severe. But in a larger sense, this is simply a return to normal. This is what people of principle do, when they find themselves in a position their conscience cannot abide: They resign. This is what normal politics looks like.

With “conservatives’ like Harper and his minions in Parliament, who needs Liberals or New Democrats?  These so-called “friends” of mine are far worse.  At least a Liberal or New Democrat won’t hide the fact they despise me.  They’re quite open about it, not like those Conservative hypocrites in Ottawa.

In 2009 Yukon News writer John Thompson penned a column titled “Salary Secrecy Stems From Weak Leaders, Not Weak Laws“.  Stephen Harper, you may want to take note of what he says.  It applies to you.

Not only will our Conservative-in-name-only government led by Stephen Harper NOT disclose the salaries of public employees under $400,000, they won’t even tell us the job descriptions of these bureaucrats.

Not only are we not allowed to know what we pay these people, we’re prohibited by law from learning what they supposedly do for us.

That’s some real good accountability and openness you provided we mere citizens of Canada… you know… the meat puppets with wallets forced to pay for your gluttony and secrecy.

We’re ever so grateful.