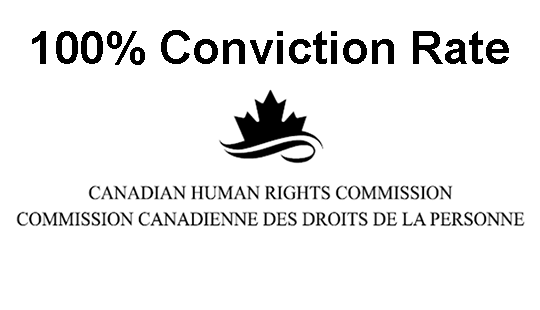 In fact, there is not a single legal defense allowed under Section 13!  Makes it pretty darned easy to convict a person since they are not “permitted” to mount any defense at all.  The mere fact the Canadian Human Rights Tribunal prosecuted them is deemed “evidence” of their guilt.

Presumption of Innocence, the very cornerstone of our legal system, is utterly irrelevant to Section 13 of the Canadian Human Rights Act and the censorious bureaucrats who apply it to Canadians (or should I say bludgeon them with it).

Freedom of Speech is another cornerstone of our Canadian society.  Yet when we censor the opinions of any single person, no matter how horrible we may think their opinion is, we destroy the very bedrock this nation was supposedly founded upon.

This legislation, Section 13 of the Canadian Human Rights Act, is not used by so-called “vulnerable minorities” in defense of themselves, but as a bludgeon to silence the thoughts and opinions of Canadians with whom a single white Toronto lawyer disagrees.

Not a single time in the history of the Canadian Human Rights Act has a “vulnerable minority” made use of Section 13 of the Act to protect themselves.  No, the reality is as horrifying as it is clear: a whopping 98% of all Section 13 complaints were filed by that white Toronto lawyer, Richard Warman.

(Thankfully, truth IS a defense against charges of defamation, libel or slander!)

Mar Stein said it best on October 5, 2009, in his testimony before the Standing Committee on Justice and Human Rights as part of their review of Section 13:

“Sometimes institutions do things that are so atrocious they cannot be reformed. They can only have the relevant powers removed, as happened to the RCMP in intelligence matters, or be abolished outright, as happened to a Canadian regiment not so long ago. The Canadian Human Rights Commission should not be more insulated from accountability and responsibility for its actions than the Royal Canadian Mounted Police or the Canadian Forces.”

“The first recommendation is that section 13 of the CHRA be repealed, so that the CHRC and the Canadian Human Rights Tribunal (CHRT) no longer deal with hate speech, and in particular hate speech on the Internet,” wrote Richard Moon in his report commissioned by the CHRC itself.

Despite that clear recommendation from their own expert, the Canadian Human Rights Commission with its Tribunal and perfect conviction rate, the CHRC adamantly refuses to relinquish its power to abuse Canadians as and when it pleases.

Right now Bill C-304, the bill that would finally repeal Section 13 of the Canadian Human Rights Act, sits stagnant in the hallowed and dusty halls of Canada’s Senate.

It is important today, more than ever before in the history of Freedom of Speech in Canada, that each and every one of us make our voices known to every single Senator in Canada, as well as to Prime Minister Harper.

Section 13 of the Canadian Human Rights Act MUST be repealed.

For a free too that makes writing your letter to every senator quick and simple, please visit PoliticalActionSoftware.org and use their free Senator Contact tool to email or snail-mail your opinion to every Senator in Canada.

Urge them (politely, of course) to immediately pass Bill C-304.

Then send a copy of your letter to Prime Minister Harper and urge him to tell his Conservative-dominated Senate to do what’s best for Canadians: Repeal Section 13.