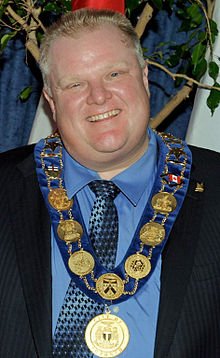 Toronto Mayor Rob Ford is under fire (again) for being everything a liberal despises. Saving Toronto taxpayers over a BILLION dollars is meaningless. Ford is a jerk and there is no low too low when it comes to attacking him in the press.

For the “crime” of being a conservative and doing exactly what he said he would do if elected Mayor of Toronto, the mindless lemmings of the mainstream media attack Ford relentlessly.

As disturbing and irrational as those endless attacks on Ford are, that is not what disturbed me the other day.

The headline that horrified me screamed

In less than 7 days people across North America donated $200K to the website “Gawker.com to buy a crappy video of that may or may not be Rob Ford smoking crack.

It took us over 7 years to raise that much money for the Bruce Montague Constitutional Challenge of Canada’s much-maligned Firearms Act.

Marc Lemire, the man challenging the constitutionality of Section 13 of the Canadian Human Rights Act, is desperately in need of funds to help him mount a successful legal argument.  Expected legal costs for his appeal and constitutional challenge will probably surpass $100,000, yet fundraising dollars for his case trickle in, just as it did in the Montague case.

By the Gawker.com example, this is a no-brainer.  We ought to be able to raise $100K in 3 days!  But, sadly, that will only happen when people value their Rights and Freedoms; something we as a culture clearly do not.

What the Gawker headline explains with crystal clarity is this:

North Americans hold voyeurism and gossip in much higher esteem than our Constitutional Rights and Freedoms.

More than anything, though, the headline just made me sad. Sad that more people will contribute money to buy a crack video than will support a cause with true value for both themselves and their children.

One would think the “Me Now” generation would be all about defending Constitutional principles like Freedom of Speech.  What could be more about “me” than my Right to freely express my “thoughts, beliefs, opinions and expressions”? Watching a crappy cell phone video of some guy who may or may not be smoking crack?

If you, like me, are one of the few who value Rights and Freedoms more than voyeurism please send Marc Lemire a few bucks and support his Constitutional Battle for Freedom of Speech.

I’ve already sent Marc Lemire somewhere around $750 and I won’t be stopping there.  Please join with me in supporting the most important free speech case in a generation.  Your kids and grand-kids will thank you.